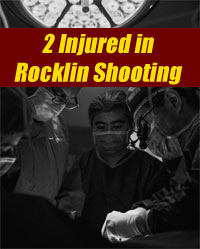 Rocklin, CA- At about 1:26 AM, Rocklin PD Officers responded to the 4800 block of Grove Street on the report of two people who were shot at a party. Upon our officers’ arrival, they located one male and one female who had non-life threatening gunshot wounds. Both victims were transported to the hospital for their injuries.

At this time of the investigation, it appears there was a disturbance at the party. Before leaving the party at least one suspect fired several rounds into the house. This gunfire struck two people who were inside the garage.

One suspect is described as a black male juvenile, 16-18 years old, 6’02” in height and about 150 to 160 in weight. He was last seen wearing a red hooded sweatshirt, jeans, and “Jordan” style shoes.

Anyone with information regarding this incident is strongly encouraged to contact the Rocklin Police Department.

Juneteenth Celebration to be held in Rocklin