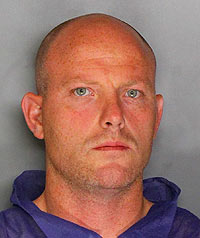 Rocklin, CA- Sean Timothy Warner of Rocklin is facing a murder charge following the death of a Sacramento man.

KCRA reported, ” A 64-year-old man has died after he was bludgeoned during a fight with a repairman at his home in the Arden-Arcade area, authorities said.”

At 1:24 p.m. on Thursday, July 25, 2019, the Sacramento County Sheriff’s Office received a phone call from a local business stating one of their employees told them he killed one of their customers. Sheriff’s deputies responded to a residence in the 3800 block of Sandra Court in Sacramento to conduct a welfare check. They located an adult male in his 60’s inside the residence with visible injury to his upper body. The male victim was transported to an area hospital with life-threatening injuries.

The suspect in this case, a 38-year-old male, has been detained by deputies. There are no outstanding suspects. Detectives believe the suspect struck the victim with an unknown object during an altercation. No motive is known at this time.

Detectives are asking anyone with information related to this incident, to please contact the Sheriff’s Office at (916) 874-5115 or Sacramento Valley Crime Stoppers at (916) 443-HELP. Tip information may also be left anonymously at www.sacsheriff.com or by calling (916) 874-TIPS (8477).