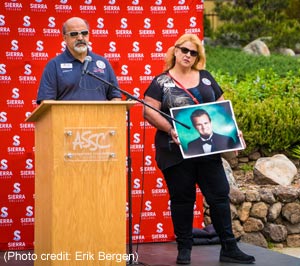 Rocklin, CA- Sierra College, Placer’s law enforcement agencies and community partners joined Lonnie and Kim George, who lost their son to a DUI accident, at a hands-on awareness event at Sierra College’s Rocklin campus to make clear the risks of driving under the influence.

MADD activists speakers Lonnie and Kim George began volunteering for Mothers Against Drunk Driving one year after their 19-year-old son, Matthew, was killed by a drunk driver in August of 2011. Lonnie makes the sacrifice of re-living Matt’s death each time he speaks in an effort to save others from suffering what he, his wife and other son, Chris have experienced. The Georges are also trained MADD victim advocates and spend several hours a month working with other families who have suffered the tragedy of losing a loved one to an impaired driver.

Attendees were able to take a field sobriety test wearing DUI goggles to simulate the impairment they’d experience after a few drinks, and the Placer County District Attorney’s Office will demonstrate a device investigators use to build virtual 3-D models of accidents and crime scenes using laser imagery.