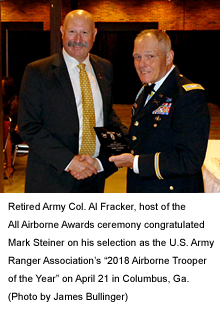 Mark Steiner of Rocklin, Calif., was recently honored with his selection as the U.S. Army Ranger Association’s (USARA) “Airborne Trooper of the Year” and was their representative to 41st annual All Airborne Awards and Festival.

The festival, hosted by the Donald D. Lassen-Atlanta chapter of the 82nd Airborne Division Association, was held April 18-21 in Columbus, Ga., home to Fort Benning and the Army’s Airborne School.  Retired Army Col. Al Fracker, chairman of the Atlanta chapter, served as the festival host and presenter for the awards dinner.

Each year since 1978, the “Airborne Trooper of the Year” awards recognizes the outstanding contributions by individuals in the various military associations that are affiliated with the Army’s designated airborne units.  This year eight recipients were honored from such associations as: the 504th, 509th and the 555th Parachute Infantry Associations.; the 11th and 82nd Airborne Div. Assn.; the Family of the Red Berets Assn., and the Society of Vietnamese Airborne Troopers – in addition to the Ranger Association.

Steiner is affiliated with the USARA’s Southwest Region and was selected from across the association’s seven regions as the overall best nominee for the prestigious award.

“I’m honored for this recognition and will continue to live up to the high standards which my fellow Rangers demonstrate every day,” said Steiner, who is the president of three Rocklin based companies: M.A. Steiner Construction, Inc.; Strike Force Engineering, Inc. and Security On-site Services, Inc.

Steiner was selected for his long support of active duty and veteran Rangers and their families.  Steiner’s philanthropic efforts over the years include the funding of the Cerros-Holtz Memorial Scholarship, which has provided over twenty $2000 educational scholarships for Rangers and family members.  He maintains an active relationship with the 2nd Ranger Battalion, 75th Ranger Regt. at Joint Base Lewis-McChord in Washington state – frequently attending unit functions – and was made an honorary member of the 2nd Ranger Bn. in September 2015.

Steiner, who is airborne and Ranger qualified, served with the 82nd Abn. Div. on active duty and with the 12th Special Forces Group in the Army Reserve.