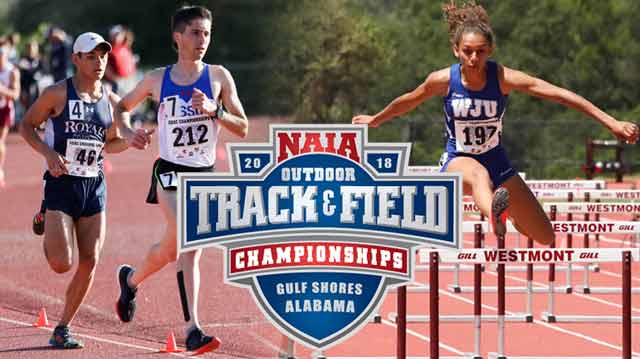 GULF SHORES, Ala. – For the seventh time and fifth season in a row, the William Jessup University Track and Field program are wheels up to the NAIA Track and Field Nationals in Gulf Shores, Alab. to compete with the top athletes in the country. This year a pair of underclassman punched their ticket to the national competition, Tyler Southwood early this season to compete in the marathon, and Vendela Williams sealing her fate in her last-chance meet now headed to battle in the women’s heptathlon.

Sophomore Tyler Southwood was the first to qualify for nationals wearing the white and blue racing in the Shamrock’n Half Marathon. His 1:13.27 time at a 5:37 per mile pace was good enough for the NAIA National standard to head to Alabama for the 26.2-mile marathon. Southwood finished second in his age bracket and was the youngest of the top 3 runners of the Shamrock’n Half Marathon.

Distance coach Parker Daniells is impressed with Southwood’s track and field season, “Making nationals was a hard fought battle as he had to make two attempts in a half-marathon which is something no one wants to do in the middle of their season. Tyler kept composure, stuck to the plan we developed and made one of the greatest achievements you can in any sport, making it to nationals.”

Throughout the track and field season, Southwood continued to train and compete for the Warriors in distance events. He would go on to be sixth overall in the conference in the men’s 10,000-meter run with his best finish of 33:47.58 at the ARC Invite and Distance Carnival.

“He has matured a lot through his running in a short span and grasping some very important concepts that will make him very successful in his future endeavors,” Daniells concluded. “I am proud of Tyler and look forward to watching a great performance.”

Sophomore Vendela Williams worked hard all track and field season to improve her marks in her seven events of play as a competitor in the women’s heptathlon. Competing in her first full event in late March at the 2018 American River Combined Events, Williams posted her first hep score of 3652, the national standard less than 300 points away (3900).

She would continue to compete in different events for the next month before taking her second shot at the hep at the Conference Championship. Williams went on to crush her previous score taking first place in the event to claim All-GSAC recognition and PR’ing in multiple events finishing with an overall score of 4035. With a couple weeks left to qualify, Williams had to be top-16 in the country to maintain her marks for nationals so she competed in a last-chance meet at the Azusa Pacific Twilight & Multi’s on May 10th. Williams would do it again breaking her personal-best marks in each of her seven events and improving her score to 4348 to solidify her spot at Nationals, currently ranked 13th in the country.

Head coach Veronica Graves said all her hard work has got her to where she is now, “From learning how to do new events to trusting the vision and process, Vendela has made massive strides in one season, and now she’s ranked 13th in the country for the women’s track and field heptathlon.”

Graves went on it say her goals don’t stop there, “Her goal now is finishing top 8 to attain the highest recognition possible in intercollegiate athletics, NAIA All-American.”

Competition for Williams will start on Thursday at 10:30 am where her first day of competition will be the 100-meter hurdles, high jump, shot put and 200-meters. Friday she will wrap up the heptathlon with the long jump, javelin and 800-meters, also starting at 10:30 am and followed by the award ceremony. Southwood will race on Saturday with the gun sounding at 6 am for runners to start the 26.2-mile race.