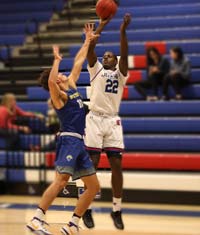 ROCKLIN, Calif. – Just one day prior senior men’s basketball player, Keith Phillips was awarded his second GSAC Player of the Week award, and the NAIA released the National Player of the Week naming the starting forward earning the program’s first-ever honor.

“With so many great players in the NAIA, it’s a great honor for Keith to be recognized as the National player of the week,” head coach Lance Von Vogt reflected. “We’ve had some great players here in the past that were close to earning this honor, however, this is the first time that we’ve had someone who actually accomplished it.”

Phillips continues to ring in the accolades with the New Year, so far in his final season, he has been named a Pre-Season All-American, 2-time GSAC Player of the Week and now first-ever National Player of the Week.

This past week was a record-setting one for Phillips as he scored the most points in a single contest with 40 over University of St. Katherine, while he also holds the No. 2 slot with 35 points inked earlier this season. The 40 points and 10 rebounds was his fourth double-double of the season and he continued that effort against UC Merced on Saturday with 23 points and one rebound shy of another double-double with 9.

“Ultimately it’s a team award because you don’t win this honor unless you win the games,” Von Vogt continued. “Additionally Keith only scored three unassisted baskets this past week beyond his offensive rebound putbacks which means his teammates were instrumental in his accomplishment.”

“It’s an honor to receive this award and means a lot to me,” Phillips commented. “I just want to give thanks to my teammates, coaches and my family.”

Currently, the starting forward is top-10 in the country for points per game (21.2) and 15th in overall scoring (254). Halfway through the season, the starting forward has a total 755 career points, 8th best in the record books and 331 rebounds which puts him sixth overall in program history.