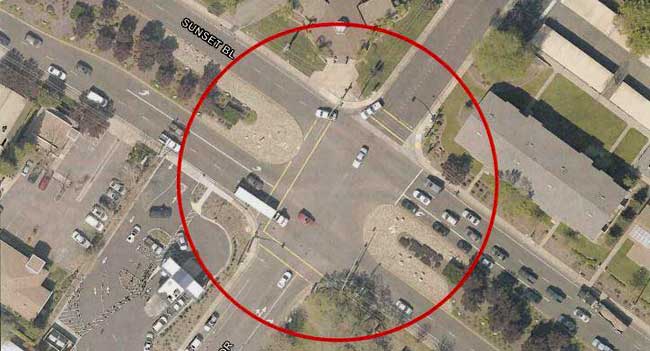 Rocklin, CA- The City Council recently approved a resolution to upgrade the intersection of Sunset Boulevard and Springview Drive in order to cut down on traffic congestion in the area.

Residents use the intersection to drop off and pick up their students from Springview Middle School, located on Fifth Street, and to drive to Johnson-Springview Community Park, one of the largest parks in the City. The intersection also houses Dutch Bros. coffee shop, a popular drive-through coffee chain open 24 hours. These factors make the intersection highly trafficked during peak hours.

The current left turn lane on Sunset Blvd onto Third Street has a capacity for nine cars, which quickly fills up during peak traffic hours. In addition, the existing drainage-a valley gutter-requires cars to slow down before crossing it, adding to congestion within the intersection.

Improvement plans include extending the left turn lane to allow the queuing of roughly 18 cars and replacing the valley gutter with more efficient drainage. The upgrades will reduce traffic congestion during peak hours significantly.

“A longer turning pocket will improve vehicle flow on Sunset and allow for faster and safe movement of cars turning from Sunset Blvd. to Third St.”

Four construction companies offered bids on the project, and McGuire and Hester of Sacramento was awarded the job with a bid of $365,740. The project will be partially funded by money Rocklin has received from California’s SB 1 “gas tax,” passed in 2017, as well as other state transportation funds.

Construction is expected to begin in spring as weather permits and will take approximately 4-5 weeks to complete.

Nearby neighbors in the community will be notified of the construction prior to work beginning, and updates will be posted on Rocklin communication channels when they are available.