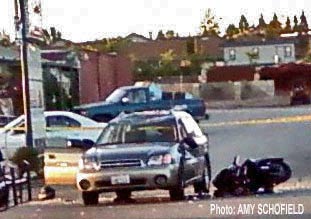 A motorcycle was being ridden west on Douglas at an unknown rate of speed. According to a witness, the motorcycle did a “wheelie” and then collided with a Subaru Outback sports utility vehicle that was coming out of a garden/nursery business  onto Douglas Boulevard.

The motorcyclist was taken to Sutter Roseville Medical Center with critical injuries. The two occupants of  the Subaru were taken to Kaiser Hospital with what appeared to be minor injuries.

All lanes of westbound Douglas Boulevard are closed at this time while the Roseville Police Department’s Major Injury Accident Team investigates the collision.

A Roseville Police Department motor officer was also involved in a collision while responding to the Douglas/Sierra College collision.

The motor officer was riding eastbound on Roseville Parkway near Creekside Ridge Drive with his emergency lights and siren activated,  when he collided with another eastbound vehicle. The Roseville officer was taken to an area hospital with apparently minor injuries.

That collision is being investigated by the California Highway Patrol.