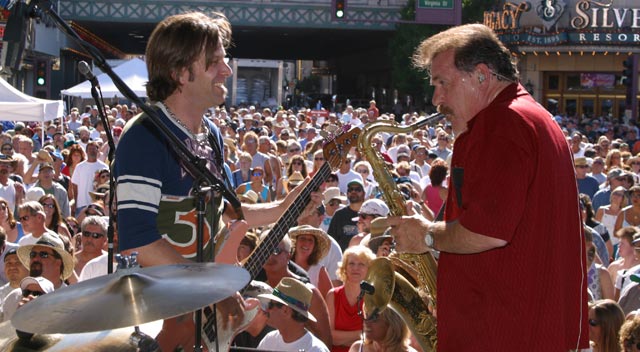 Reno, NV – Fire up the grills, tap the kegs and crank up the tunes for Reno’s best summer kick-off party.

The Eldorado Resort Casino is pleased to announce the Spin Doctors and Vanilla Ice will headline the 23rd annual Great Eldorado, BBQ, Brews and Blues Festival, June 15-16, along with festival favorites Tommy Castro and the Painkillers, Shane Dwight and US Air Force Band Mobility. The concerts are free to the public and part of the annual festival that is equal parts barbeque block party, microbrew tasting event with more than 60 microbrews from around the world and music festival with two stages featuring nonstop rock and blues.

Schedule is subject to change.

In August 1991, the Spin Doctors released their full-length debut album “Pocket Full Of Kryptonite,” co-produced by Peter Denenberg and Frankie LaRocka. Relentless touring and a wave of positive press kept the album alive into the next year, when sales began to increase dramatically. The album was certified gold in September 1992 and received an additional boost from the band’s October appearance on SNL. Reaching the one million mark in January 1993, “Kryptonite” entered the Billboard Top Ten one month later.

By June 1993, the album was triple platinum and had breached the Top Five among Billboard Pop Albums while spinning off two major hit singles: “Little Miss Can’t Be Wrong” and the No. 1 Rock radio song of 1993, “Two Princes.” Ultimately, “Pocket Full Of Kryptonite” sold over five million copies in the US and another five million overseas.

Vanilla Ice is a rapper and TV reality show personality whose song “Ice Ice Baby” put him on the map in 1990. During his meteoric rise to fame in the early 1990s, Vanilla Ice became the first white rapper to top the pop singles chart. Before long, Vanilla Ice became a pop idol, with his likeness on a variety of products. He made a cameo appearance in “Teenage Mutant Ninja Turtles II: Secret of the Ooze”(1991). That same year his second single, “Play that Funky Music,” reached the number four spot on the pop charts. In 2009, Ice began hosting “The Vanilla Ice Project” on DIY Network. His latest album “WTF – Wisdom, Tenacity & Focus” was released in August 2011. Ice is currently signed to Psychopathic Records.

The Eldorado Resort Casino Reno is a rare mix of upscale atmosphere with a relaxed vibe. Boasting nine award winning restaurants, unlimited nightlife, a Broadway-style theatre, luxurious accommodations and dynamic casino action, the Eldorado is located in the heart of downtown Reno.