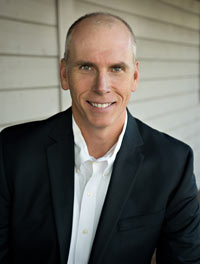 Brennan joined Landmark Construction in 2006 as Senior Project Manager and Estimator and was promoted to the role of Vice President of Preconstruction, and then Vice President of Operations, during his tenure. He has served as Project Executive for many of Landmark’s most important projects, recently completing The Bayshore School’s new $30m two-story urban campus in Daly City.

Bittaker announced the transition to employees at Landmark’s monthly management meeting on March 26. “I have confidence that Kevin will be an exceptional President as he carries on the customer-centric culture and can-do attitude which are fundamental to Landmark Construction,” said Bittaker. “He brings the energy, drive and motivation to take Landmark to the next level.”

Prior to joining Landmark Construction, Brennan worked in the industry for 16 years managing multiple large public works projects such as the Ronald Reagan Washington National Airport Expansion in Arlington, Virginia.

Brennan earned his BS in Civil Engineering at The George Washington University and a BA in Physics from East Stroudsburg University.  “I look forward to contributing to the advancement of the company through the next generation,” said Brennan. “I really appreciate the support and mentoring I’ve had along the way that has brought me to this exciting time as president of Landmark Construction.”

As a multiple Ironman Triathlete, serious backcountry skier, competitive mountain biker and avid kayaker, Brennan will continue the Landmark Construction culture that celebrates adventure while meeting challenges and offers employees many opportunities to build comradery as they challenge themselves athletically and enjoy the outdoors.