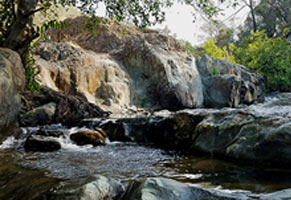 Auburn, Calif. – The terms of a land purchase agreement that could expand and improve access to Placer County’s increasingly popular Hidden Falls Regional Park were approved Tuesday by the county Board of Supervisors.

The agreement terms authorize the purchase of the 50-acre Twilight Ride property northeast of the park for $1.12 million through the county’s Placer Legacy program. Approximately 33 percent of the acquisition cost, or $392,000, would come from the county’s tree preservation fund with the requirement that at least 33 percent of the property be preserved as oak woodland habitat.

The purchase would be in line with the county’s proposed Hidden Falls Regional Park Trails Network Expansion project, which, if approved, could double the park’s trail network from 30 to 60 miles over an additional 2,500 acres to the northeast of the park.

A preliminary evaluation of the Twilight Ride property indicated that, in addition to the oak woodland preservation, it could potentially accommodate a new trailhead to improve access to the park, as well as up to an estimated 100 parking spaces and 40 spaces for vehicles with horse trailers.

The board’s action approves only the terms of a purchase agreement for the land, not the final sale of the land or the project itself. The terms include a due diligence period and allow the county one year to conduct public outreach, perform environmental review and obtain any needed approvals before the land sale would be completed.

In April 2016 the Board of Supervisors approved parking restrictions to help reduce traffic on roads approaching the park, a concern of neighboring residents. To relieve congestion in the park’s one existing parking lot, Placer implemented a parking reservation system in September 2017.

Supervisors Jennifer Montgomery and Jim Holmes declined to support the agreement in a 3-2 vote, both proposing to delay the vote to allow for more community discussion before making a decision. Board members directed parks staff to increase community engagement as they continue to develop the proposed trail expansion plan.