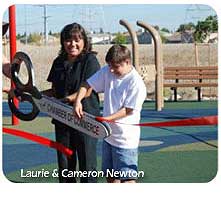 Roseville, CA- Join us for the dedication of the newest playground in Roseville – and the second of what will eventually be three with universally accessible facilities at Mahany Park.

The park is approaching completion of Phase I of the project, and is designed for children ages 5 and under. You’ll see firsthand how this design helps children of all abilities play together, creating and strengthening the bonds of friendship.

With Maidu Park completed in May, the city’s third Universally Accessible Playground is scheduled in Royer Park.

In 2008 the City Council committed $1 million in funds to jump-start these projects, and is moving toward its community partnership fundraising goal of an additional $1.2 million from private donors, large and small.

All funding for project construction have been and will be from the citywide park fund, grants and donations; no money has been used from the city’s general fund.

Donations are welcomed as we help make the dream of Universally Accessible Playground a reality for all children. They may be sent to: