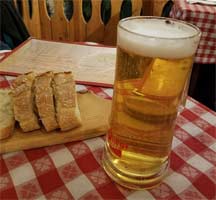 Napa Valley, Calif. – The Napa Valley is renowned for its mastery of the grape, but it is also gaining appeal for its craft breweries and taprooms that offer IPAs, ambers, wheats, pilsners, porters and more. The region’s winemakers, winery workers and restaurateurs not only patronize these breweries and enjoy the brews, but many of these personalities are actually crafting the beers aside from their “day jobs.”

From robust production to the tiniest of nano-breweries, these taprooms offer craft beer fans a way to experience the valley beyond the grape. Explore and experience the Napa Valley’s best in artisan brewing, from American Canyon in the south to Calistoga at the northern end of the Napa Valley.

The City of Napa

The City of Napa has seen a renaissance in the past decade with premium lodging properties, restaurants, music venues, wine tasting rooms and more recently, breweries and taprooms.

Located on historic Main Street, the Napa Palisades Saloon brews many of the beers on the menu, and offers an extensive selection of IPAs and other brews on tap, as well as by the bottle.

The Oxbow District in downtown Napa is home to two of the region’s top taprooms. Trade Brewing, which focuses on brewing high quality craft beer in small batches, opened in November 2017 and features small batch beers, snacks and panini sandwiches. Fieldwork Brewing Company, located in Oxbow Public Market’s main hall, offers a unique tasting experience of a rotating selection of craft beers. Visitors to its Napa Taproom can expect an ever-changing tap list of fresh releases to enjoy by sampler flight, beer by the glass, and fresh beer filled “to go” in growlers and crowler cans. The Oxbow Public Market offers a variety of dining options, and Fieldwork encourages guests to bring in outside food to enjoy at their bar or on their al fresco deck facing First Street.

Tannery Bend Beerworks, Napa’s neighborhood brewery, is small in size but big in experience. Tannery Bend produces unique, small batch beers that are inspired by local ingredients and born from a collaboration between brewing and culinary minds. Each batch of beer that brewmaster Matt Cromwell oversees totals just 150 gallons, all of which are proudly crafted on-site. The entire “nano-brewery” is located in historic old town Napa and fits inside a 1,500-square-foot space, including the taproom. Visitors may either stop by the taproom, which is open daily, or can find the beers on tap around Napa Valley at restaurants including Brix and Forge Pizza, as well as Archer Hotel Napa and Napa Palisades Saloon.

“We love that we were at the start of Napa Valley’s growing beer scene,” stated Matt Cromwell, brewmaster for Tannery Bend. “For people who grew up in Napa, it’s really fun to be a part of this and give something back to our community, while still doing something totally unique. The saying goes, it takes a lot of beer to make wine, so as a brewery in wine country, we subscribe to the belief that you can’t have one without the other.”

“St. Clair Brown beers are made with special care and the best quality organic malt, hops, yeast and other ingredients. We strive for our beers to be balanced and food friendly,” stated St. Clair. “Wet hops for our Saison beer and honey for our Honey Wheat Ale are also sourced from local organic farmers.”

When asked about her dual role as both a winemaker and brewmaster, St. Clair said, “It’s great making beer amidst the Napa wine and food scene. People are eager to try the beers and really seem to appreciate the subtle nuances and complexity of flavors.”

For those who want a more “active” beer experience, Active Wine Adventures “Hike and Beer Tour” includes a moderate hike through hills and forests with breathtaking views of Napa Valley. Each hike ends with a visit to a local microbrewery with a few glasses of Napa Valley craft beer, paired with lunch.

Barrels & Sons Pilsner may be found at Kelly’s Filling Station & Wine Shop in the Town of Yountville. Co-founders and scions Carlo Mondavi, Jacob Busch and Elliott Taylor are turning heads by brewing a single pilsner brew at the highest level.

“We think having our focus be one pilsner is unique,” stated Taylor. “It’s fresh, crisp and bright with both fruit and floral notes with a backbone that allows it to balance a meal rather than over power it…and, when ice cold it’s super refreshing.”

“There is a saying that it takes a lot of beer to make great wine. The reverse of that is that it takes a lot of wine to make world class beer,” added Taylor. “All three of us love wine. In fact, for Carlo, wine is his true passion and focus. We all just happen to love this fresh style of pilsner and after a day of working in the winery we want something crisp, refreshing and delicious.”

In addition to Kelly’s, visitors to Napa can often find SONS Pilsner in select Napa Valley restaurants and bars.

At Mad Fritz Brewing Co. in St. Helena, Nile Zacherle and Whitney Fisher, each also accomplished winemakers, are creating extremely high-quality brews at Mad Fritz, including stouts, IPAs, lagers, porters and more. Mad Fritz offers intimate tastings in its taproom and their beers are also on draft at many restaurants throughout the valley.

“Our philosophy is to grow, malt and source our ingredients locally as well as with small craft maltsters to brew beers that are authentic to origin,” stated co-owner Nile Zacherle. “The results are ales, lagers as well as mixed fermentations that express the personality of their ingredients. Many of our beers are single hop, single malt and water source specific thus promoting ingredients over recipe. When we get asked, ‘Where was your beer grown?’, we can tell you.”

“It’s a wonderful journey when you can farm your beers in a region known for winegrowing,” adds co-owner Whitney Fisher. “The Napa Valley attracts consumers that have an interest and passion for fine food and wine. They can have simple to complex taste preferences depending on what they are interested in. Our beers offer a winemakers’ approach to beer that can be both simple and complex depending on the style. These barrel-aged, naturally carbonated beers are a great way to finish the day after wine tasting.”

The town of Calistoga, at the north end of the Napa Valley, is home to the valley’s oldest brewery. Established in 1987 by the Calistoga Inn, the Napa Valley Brewing Company is the first establishment to brew beer commercially in Napa County since prohibition. Napa Valley Brewing Company Brewmaster Shawn Seidel brews four award-winning beers, a wheat ale, pilsner, red ale, and porter, in addition to seasonal beers that are brewed throughout the year, such as the German Kölsch, Blitzen I.P.A., Belgian Pale Ale and their Dugan Oatmeal Stout.