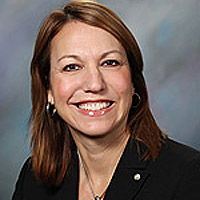 Garcia, a Senior Vice President with Granite Community Bank, N.A., was among thousands of women who were nominated. Nabisco announced the contest in February and searched for 100 women throughout the United States whose contributions were making a significant impact with friends, family, community and society.

‘From helping military widows to raising money in support of ill children, it was amazing to learn what women in this country do to initiate positive changes in their communities and the lives of others,’ said Sheldon Cummings, senior brand manager for Nabisco 100 Calorie Packs. “Nabisco is privileged to honor these unique women in a way that will hopefully inspire others.’

Garcia, along with the other selected winners, are slated to be featured in a two-page spread this October across national Time Inc. magazines, including  People, Entertainment Weekly, InStyle, Real Simple, Cooking Light and Health.

The 100 women, who represent 80 cities and 30 states, including seven from California, met recently in Los Angeles. The winners were photographed during their stay and attended the Film Independent’s Los Angeles Film Festival. The women attended a VIP screening of the new independent women’s interest film, ‘Phoebe in Wonderland,’ and met the movie’s stars, , Bill Pullman, Elle Fanning, and writer-director Daniel Barnz.

‘The underlying story with all these women is they were touched by a health issue or personal challenge, decided to do something about it and championed a cause,’ Garcia said. ‘I am thrilled and humbled to receive this acknowledgment, but more importantly this is a wonderful opportunity to promote breast cancer awareness and our ongoing fundraising efforts in South Placer.’

A role model for other cancer victims and survivors, Garcia was nominated by Julia Burrows, Secretary of the South Placer UCD Breast Cancer Endowment.

‘Carol’s tireless efforts and enthusiastic recruitment of volunteers to plan events and solicit donations has resulted in $500,000 raised in just two years,’ Burrows wrote in her nomination letter. ‘Carol is also compassionate, counseling cancer victims. She is very deserving of this recognition.’

A graduate of Roseville High School and California State University Sacramento, she is married to her high school sweetheart, Orlando Garcia. The couple have two grown daughters, Raeanne and Sherry.