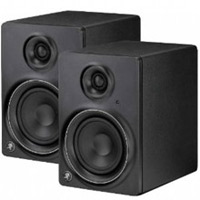 Roseville, Calif. – No Matter if they are the MKI or MKII or MKIII models, these Mackie Monitors just plain kick butt.

When I first went monitor shopping I was in the market for a small near field monitor for my project studio. The first choice was the dyna audio BM5 as these are the hotshots in all modern studios and very spendy to say the least. They were very impressive during testing.  They had a set of Mackie MR5’s set up right next to the Dyna’s and the results were shocking. The tone was very close and the soundstage was almost equal for a cost at more then half of the Dyna’s.

The power is just right for a nice size control room and they do have bass & treble cut & boost on the back. If you have a sub you may find it’s not needed much as these have such a nice bass presence to the mix. The best thing about these monitors is no ear fatigue after mixing for long periods of time and they also translate very well from mix to playback in other decks. The truth is, you may never need anything with more power or bigger size than the Mackie’s.

Music producers have commented positively on the quality of my reverb & delay mix, which can attributed to the MR5’s and heard clearly even on very full, dense mixes. Using a moderate Soundcraft mixer and some good quality outboard gear with analog punch, monitors  were often beat up within a year and three sets of KRK’s were worn out before getting these Mackie’s.  I also use a Neve pre to boost the bass guitar in recording and most small monitors cannot handle this well at all, but the MR5’s take it and then some.

It was a pleasure to record & mix on the Mackie MR5 monitors and for the cost there is nothing out there that compares. On a scale of 1‐10,  it rates a solid 8.5

I highly recommend the Mackie Monitors for all your recording needs. They are also a good fit for casual CD listening.