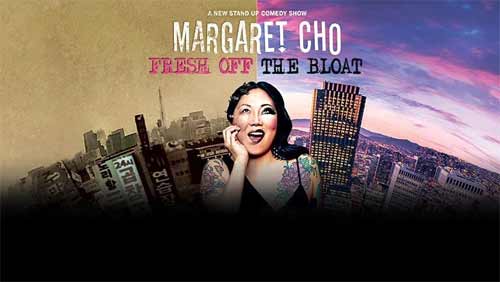 Sacramento, Calif. – The Crest Theatre welcomes Maragaret Cho to Sacramento this Saturday night at 7:30 pm. Fresh Off The Bloat tour is being billed as Margaret’s “sickest stand-up comedy show to date.”

Five time Grammy & Emmy nominated comedian Margaret Cho continues her wildly popular “Fresh Off The Bloat” tour into 2020. Margaret recently guest starred on NBC’s long-running drama series “Law & Order:SVU” and stunned America by singing her way through the wildly popular break-out hit show The Masked Singer. Cho was named one of Rolling Stone magazine’s 50 Best Stand-Up Comics of All Time, while CNN chose her as one of the 50 People Who Changed American Comedy.

She has received rave reviews for her latest tour with the Chicago Tribune saying “Be it on-screen (“30 Rock,” “Drop Dead Diva”) or on stage, Margaret Cho has been one of the most exciting, unpredictable stand-up comics working for some time, and that hasn’t changed in 2019. If anything, the Asian-American female comedian’s voice has become more valuable than ever, given today’s social climate, and Cho’s material remains just as compelling, thanks in part to-and sometimes in spite of-her unapologetic delivery.”

“Fresh Off The Bloat” has traveled worldwide for over 2 years and is certainly her sickest stand-up comedy show to date. A pioneer amongst women in comedy, Margaret doesn’t take anything for granted as she continues to tackle difficult subjects with sensitivity and her razor sharp insight with her takes on addiction, abuse, activism and Asianness. It’s all about the politics of disgust and what is disgusting about politics. Aptly titled, “Fresh Off The Bloat,” Margaret says, “Fresh Off The Bloat” is my sickest show to date. My grandmother said “You look like bloated as if you’ve been found dead in a lake after several days of searching.” Koreans are the most savage of all the Asians. My new show is all about being fresh off drugs and drinking and suicide and coming back to life – finally fished out of the river Styx. It’s meta. It’s magical. It’s me.”

Promote your important local event! Share all the key details with colorful graphics, website link, ticket info and full descriptive text We’ll share it with our readers, including prominent placement on our homepage and shared on our social media!
>> Get Started Here