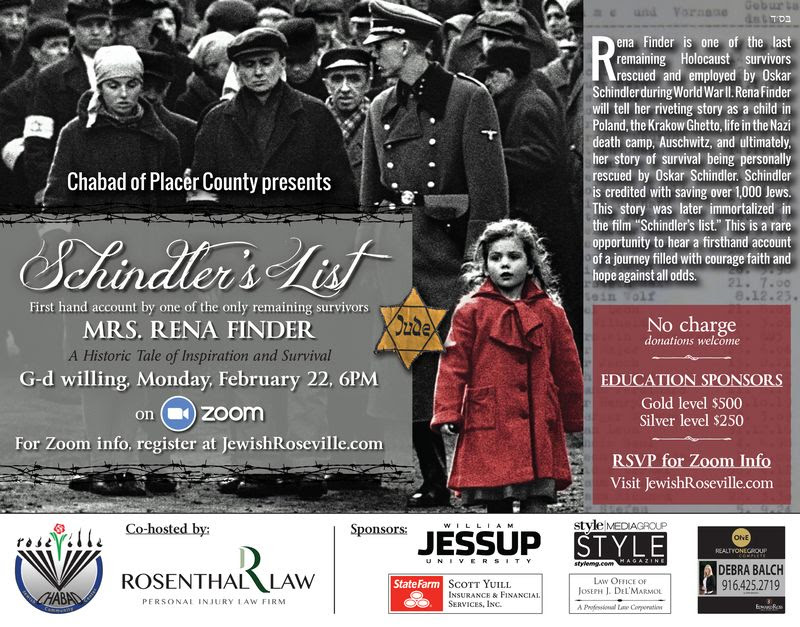 Rocklin, Calif. – Holocaust survivor Rena Finder, one of the last survivors rescued and employed by Oskar Schindler during World War II, will be the featured speaker at this year’s annual event to remember the Holocaust on Monday, Feb. 22, 2021.

Finder and her mother were among the 1,200 Jewish people protected by Schindler, who put them on a list to keep them from being sent to Nazi concentration camps, later well-known as “Schindler’s List.”

The event will be a virtual event for the second year given COVID-19.

Presented by the Chabad Jewish Community Center of Placer County, the annual event featuring a Holocaust survivor serves as a powerful message in the battle against anti-Semitism, bigotry and hate. The event begins at 6 p.m. and is free to attend online. To reserve a spot and to receive information to attend via Zoom, please visit Chabad Center website by clicking here.

“We are honored to have Rena Finder present her story to the people of Placer County this year,” said Rabbi Yossi Korik, Director of the Chabad Jewish Community Center of Placer County. “Rena Finder benefitted from the kindness of Oskar Schindler at a time when few were willing to advocate for the Jewish community amid the atrocities of that time.”

Rena Ferber Finder was born in Krakow, Poland in 1929. When the Germans invaded Poland in 1939, life as she knew it was upended. Nazi troops forced Jews like Finder and her family to move into the ghetto. After Finder’s family relocated, the Gestapo came for her father, taking him away – he never returned.  Eventually, the SS evacuated the ghetto, ordering all of its residents to move up the hill to the Plaszow work camp.

For Finder, hope came in the form of Emalia, an enamel kitchenware and ammunition factory owned by Schindler, a German industrialist. Schindler, a non-Jew, did everything in his power to provide the Jews that labored in his factory with sufficient food and accommodations. In 1944, the SS ordered Schindler to shut down Emalia and ordered that the women working there be sent to the Auschwitz-Birkenau concentration camp.

Aware of what would happen if his laborers moved to Auschwitz, Schindler negotiated with the SS and was able to relocate his factory to Brunnlitz, Czechoslovakia. He wrote out a list, which became known as Schindler’s List, with the names of former workers who should be kept off the trains headed to Auschwitz. Finder’s name was on the list and, along with her mother, she traveled to Brunnlitz to work at Schindler’s new plant.

The Chabad Center is committed to exposing young people to these stories and has made this an annual event, with different Holocaust survivors coming to Placer County.

About the Chabad of Placer County

Inspired by the teachings and legacy of The Lubavitcher Rebbe, in 2005 Rabbi Yossi & Malkie Korik founded Chabad of Roseville, which serves as a unique and vibrant beacon of Jewish life and education in the Placer County Area. Chabad is dedicated to making the beauty and joys of our Jewish traditions and heritage accessible, relevant, and meaningful. Visit the Chabad Center’s website at www.JewishRoseville.com