Flock Of Seagulls w/Men Without Hats 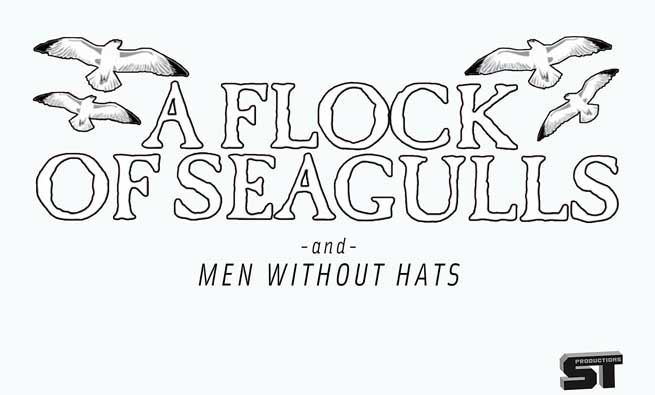 Enjoy taking a walk down memory lane with the incredible Flock of Seagulls and Men Without Hats under the stars at Quarry Park Amphitheater.

A FLOCK OF SEAGULLS

As well-known for their bizarrely teased haircuts as their hit single “I Ran (So Far Away),” A Flock of Seagulls was one of the MTV video rotation staples of the new wave era. Growing out of the synth-heavy and ruthlessly stylish new Romantic Movement, the group benefited considerably from MTV’s heavy rotation of the “I Ran” video in the summer of 1982. Mike Score’s outrageous hair style is forever embedded in pop culture.

They told the world “You can dance if you want to” 30 years ago – and we did. A few years later they instructed that same planet – the third – to go Pop – and we did.

Men Without Hats have been creating iconic and irresistible pop music for three decades and have soared back with the release of their latest album, Love in the Age of War, to be released this May.

Led by charismatic front man, lead singer and songwriter Ivan Dorschuk, MWH has surged back starting with a breakout show at 2011’s SXSW and followed by extensive, well-received touring across North America over the last year.

Along with keyboard player Lou Dawson and guitarist James Love, Doroschuk and the Hats have been delivering high energy shows packed with all of the band’s absurdly catchy lyrics as well as great tracks from the new release, a disc that picks up where the hit-making band left off.

“Sure lots has changed in music over the last few decades, ” says Doroschuk, ” but the world still loves a hooky song with a bit of edge that can get you thinking.”

And that’s what the Hats deliver, tracks that will get you bopping across the dance floor with subtle messages that will haunt you long after the music has ended.

It’s no surprise that this band has topped charts across the planet and even picked up a 1983 Grammy nomination for Best group (Culture Club won it). The Hats song catalog always sounds fresh and relevant and Hats hits have been featured on The Simpsons, Family Guy and Glee and Pop Goes the World now lights up TV screens in a TIDE ad.

Men Without Hats have been providing a hit-filled and hooky soundtrack for our lives since the 80s and the band powers magnificently into the 21st Century with a steady stream of jaw-dropping live shows and a fantastic new album.

You still can “dance if you want to” and Men Without Hats makes it easy and fun.