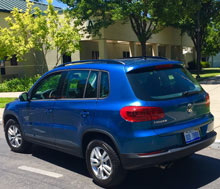 Roseville, Calif. – The latest version of Volkswagen’s compact crossover sport utility vehicle is lighter and has discontinued two its models and replaced them with two new ones. Volkswagen made significant changes from the ground up on the “new” Tiguan. For 2017, VW has dropped the SE and R-Line trims and replaced them in the lineup with the Wolfsburg edition and Sport models

But two things that didn’t change and continue to be a hindrance for the little brother of the Volkswagen Touareg – size and gas mileage. The Tiguan remains one of the smallest compact SUVs and its gas mileage is poor for the class. The low mileage figures (20-24 mpg) is certainly not a good thing for a manufacturer that is in an uphill climb to win back buyers thanks to irregularities in its internal emissions testing.

The Tiguan resides among the smallest in the compact SUV class with an overall length just over 174 inches. The size has ramifications to backseat occupants and also in terms of storage. Seating in the back is cramped with leg room an issue, one that gets even worse when taller front-seat folks need more room. The cargo area is 23.6 cubic feet and trails many rivals by double digits. Even with the second row folded, the space only increases to 56.1 cubic feet.

However, thanks to the reclining rear seating having a sliding capability, more cargo area can be created with children in the back.

The lack of good gas mileage is even more disturbing considering the compact SUV class typically deems this aspect highly important. The Tiguan ranks near the bottom in gas mileage and some rivals average double digit figures higher than this VW. That’s baffling to me because the Tiguan has a turbocharged engine and they typically deliver both performance and solid gas mileage

The front-wheel drive, six-speed automatic transmission Tiguan has one engine – a turbocharged 2.0 four cylinder that generates 200 horsepower and 207 pound-feet of torque. It has a little lag from a start position, but accelerates nicely overall, going 0-60 mph in 7.5 seconds, which is quick for a compact SUV.

Although we feel there should be at least one other engine in the mix, the turbo engine gives the Tiguan more power to climb hills and better passing capability on the freeway. The Tiguan doesn’t possess an athletic feel, yet it is sporty enough to provide a good overall driving experience, delivering a smooth and quite ride.

The 2017 Tiguan receives a new infotainment system that is fairly easy to navigate and has a sensible layout. The new system features Apple CarPlay and Android Auto functionality, while the Bluetooth can accommodate two phones at the same time.

There are some nice aspects to the 2017 Volkswagen Tiguan, like the turbo engine, an attractive exterior look, and several improvements to the interior. However, until the issue of size and inadequate gas mileage are addressed the Tiguan will have a problem competing against rivals like the Ford Escape, Honda CR-V, Toyota RAV4, Mazda CX-5 and Kia Sportage.