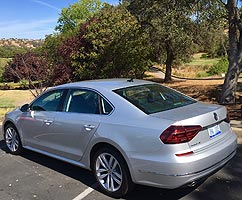 Roseville, CA– Not much has changed with the Volkswagen Passat over the last six years. And frankly, that’s not necessarily a bad thing because the Passat possesses some enviable qualities that make it a good choice in the midsize sedan category.

Although significant changes have not been made, the Passat still can match many of its rivals. Aside from a modest refreshing in 2016, the Passat is basically the same sedan that went through a redesign in 2012. The six-year gap has left the Passat a tad behind technology wise.

The Passat is the only European-made vehicle in a class that is dominated by American, Japanese and Korean manufacturers. Note that the current line of Passats are built in Chattanooga, Tenn. The Passat has a reputation for being a bit more luxurious than some of its counterparts, bridging the gap between the average midsize sedan and luxury brands that are overall superior to the Passat, yet also much pricier.

The 2018 Volkswagen Passat might be a little overdue for a redesign, but some changes did take place. Volkswagen upgraded its turbo, four-cylinder engine and added a new trim model featuring its V6 engine. There’s definitely some decision making with the Passat, which comes in six trim models (S, R-Line, SE, SE with Technology, GT, SEL Premium).

Cost cutting at a price

Criticized previously for its high price tag, today’s Passat is more affordable. The base model can be driven off the lot for a little over $23,000. Note that the cost-cutting has also come with reduction of some niceties.

One thing that hasn’t changed regarding the Passat is its expansive interior design. It continues to be a class leader in this area and is known for its spacious back seat that can accommodate even large individuals. Legroom is fantastic in the back seat and there’s considerable comfort as well.

Folks residing in the front seat will also experience comfort and room to spare. The cargo space is very sizable as well – 15.9 cubic feet.

We applaud Volkswagen for its use of good interior materials and avoiding any hard surface. The Passat’s interior layout is nothing fancy, something one might expect from German engineers – a logical and simple design. What’s not so cool is a small 6.3-inch screen with average resolution.

The 2018 Passat features two engine choices. The base model is a front-wheel-drive, turbocharged 1.8-liter, four cylinder that produces 174 horsepower (an increase of 4 hp) and 184 pound-feet of torque. It’s pretty quick, reportedly going 0-60 in 7.7 seconds, and it now goes a little farther (25-36 mpg) than previous models.

The Passat receives high marks for its driving acumen. We loved the smooth, quiet ride that is mostly devoid of any road or wind noise. It features precise steering, good handling, and is very accommodating driving around town and providing a refined highway ride.

Although the Volkswagen Passat is due for a redesign to upgrade some of its technology, there’s nothing wrong with the 2018 model. It comes at a very reasonable price for a sedan that has a lot of fine qualities.