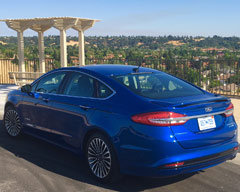 Roseville, Calif. – Proceed with caution when car shopping for a Ford Fusion. There are several versions of the popular midsize sedan and all of them have a good upside.

It didn’t take long for the Ford Fusion to gain popularity. The midsize sedan debuted in 2006 and 11 years later the vehicle is still competing with the heavyweights in its class.

We recently tested the 2017 Ford Fusion Hybrid and came away impressed for a variety of reasons. But there are two other distinct versions of the Fusion: the sedan with a gas-powered engine and the plug-in hybrid technology Ford Fusion Energi. There’s also a lot of variety when choosing an engine – there are six different ones among the Fusion line.

One of the issues facing the Fusion is competition – it’s fierce. The segment includes Honda Accord, Chevrolet Malibu, Mazda 6, Toyota Camry; Volkswagen Passat, Kia Optima and Nissan Altima. From this vantage point, these are all very good vehicles.

Although historically the Fusion has fared well in the midsize sedan category, its sales have dropped slightly the past three years. However, that trend may stop, thanks to a modest revamping. The 2017 Ford Fusion adds numerous updates and also offers the Fusion Platinum, a power-laden, luxury edition with some cool upgrades.

The Fusion Hybrid replaced the much-maligned MyFord Touch system with a new Sync 3 system infotainment interface, a definite improvement. A new push-button engine start and rotary transmission selector are standard with the Hybrid.

The Hybrid engine is a 2.0-liter, four cylinder that interacts with the electric motor to produce 188 horsepower. It goes 0-60 mph in 8.5 seconds, a full second slower than the Camry Hybrid. The good news is the Fusion Hybrid runs forever, thanks to getting 41-44 mpg.

The Fusion sedan has a base model engine that is a 2.5-liter, four cylinder that produces 175 horsepower and 175 pound-feet of torque. It’s not our recommended engine, but it’s no dog either.

We prefer the Fusion Platinum engine, an energetic turbocharged 2.0-liter, four cylinder that generates 240 horsepower and 270 pound-feet of torque. It’s been clocked going 0-60 mph in 6.9 seconds. Gas mileage is 21-31 mpg, which is less than the base model (23-34 mpg).

Another engine option is the turbocharged 1.5-liter, four cylinder that has 181 horsepower and 185 pound-feet of torque. Gas mileage ranges from 23-34 mpg.

The Fusion is a spirited sedan that also possesses athleticism, so it’s fun to drive. The solid handling puts the driver in a good state of mind in terms of control in all driving situations – freeway, around town, and even on a zigzag back road.

We’re also fans of the Fusion interior that features a stylish cabin that looks cool and is efficient. Note that the Hybrid trunk, which harbors the battery pack, has limited space (12.4 cubic feet) and can’t store anything large due to its odd configuration.

We’ve been a fan of the Ford Fusion since its beginning and remain one. The latest Fusion lineup is improved and should keep it among the list of desirable midsize sedans.