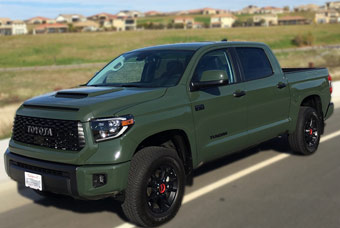 Capable Toyota Tundra meets the needs of many

Roseville, CA- Sold in the U.S. since 1999, the Toyota Tundra has made the Japanese automaker a considerable amount of money.

While many people may not associate Toyota with trucks because it only manufactures two of them, sales for both are extremely impressive. The Tundra does well, but the smaller Tacoma has exceeded its big brother. Ford still rules the truck market, but Toyota has no reason to feel overshadowed.

Judging from history, there’s no reason to believe the 2020 Toyota Tundra won’t hit six figures in sales again this year. It’s known as a no-frills, capable truck that meets the needs of many and comes at a reasonable price – $33,700 for this year’s base model.

The positives with the Tundra are standard V8 power, roomy rear seating, and the off-road TRD models are good performers. The Tundra also has negative characteristics, including below-average fuel economy (13-17 mpg), mediocre handling, substandard interior makeup, and stiff ride compared to its competition.

Although changes for the 2020 Tundra are rather insignificant, one of them has drawn frequent praise. We’re a fan of the new color – Army Green, which is offered on all TRD Pro models, and also the Tacoma, 4Runner and Sequoia.

As an off-road performer, the Tundra TRD Pro does a nice job. The shocks in the front and rear give the TRD good off-road performance and an overall better ride, reducing the cabin movement when climbing over big rocks. Equipped with a 31-degree approach angle, the TRD Pro can travel on many trails without issues.

The Tundra has one engine, a 5.7-liter, V8 that generates 381 horsepower and 401 pound-feet of torque, paired with a six-speed automatic transmission. Toyota did away with the 4.6-liter, V8 that was standard in the past. Like many trucks, we find fault with the Tundra’s lack of turning radius, which one reviewer remarked, “turns with all the grace of a large ship.”

Where the Tundra also suffers is the unsophisticated interior, most notably a lack of technology and outdated cabin layout. The Tundra has a new 8.0-inch touchscreen and added Apple CarPlay and Android Auto for 2020. Yet the instrumentation needs updating.

Improvements should be made to keep the Tundra relative. But that doesn’t mean Toyota will make them anytime soon because it produces a capable truck that continues to sell well.