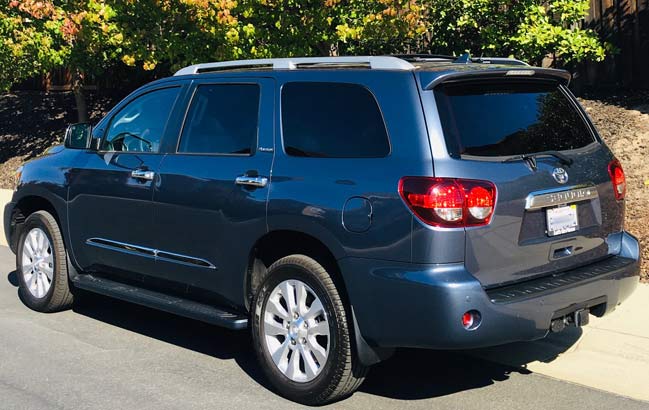 Toyota Sequoia behind the times with falling sales

Roseville, CA- It seems logical that the large sport utility vehicle is due for a redesign, since the last one took place in 2008. Yet once again, the 2019 Toyota Sequoia remains unchanged from last year. And a peek at the 2020 model reveals that no major overhaul has taken place either.

We’ve test driven the Toyota Sequoia several times in past years and it’s not like this SUV lacks value. However, the lasting impression regarding a recent week with the 2019 Sequoia: it’s time for a redesign. The last one was 11 years ago, and that’s a long time by anyone’s standards.

It would appear that more and more people are going in another direction when buying a full-size SUV. Sales in 2018 were 11,121, the lowest figure since the Sequoia’s debut in 2000. And it appears sales for the 2019 model will likely be even worse.

The Sequoia is behind the times in sophistication when compared to other large SUVs. The interior definitely needs to be modernized because it looks and feels antiquated. The touchscreen is small by today’s standards, fuel economy remains poor (13-17 mpg), and shockingly there was no keyless ignition.

Those shortcomings are glaring if one considers plunking down between roughly $49,000 to $69,000 for a new Sequoia. The competition includes the Nissan Armada, Ford Expedition, Chevrolet Tahoe and Suburban 1500.

Although nothing changed this year, the Sequoia did receive a few updates for 2018, primarily a new face that includes a reshaped grille. Also added was a new trim model (TRD Sport) and the optional Toyota Safety Sense-P that includes automatic emergency braking, adaptive cruise control, auto high beams, and lane-departure alert with sway warning.

The Sequoia is the longest, widest and tallest SUV in the Toyota lineup. It’s also accommodating by offering lots of small-item storage throughout the cabin. When properly equipped, the Sequoia has a 7,400-pound towing power, a figure that several of its competitors can exceed.

There is no diversity with the Sequoia engine – take it or leave it. It’s a pretty good one, a 5.7-liter, V8 that generates 381 horsepower and 401 pound-feet of torque. It possesses freeway passing power and for such a large vehicle, has a very respectable 0-60 mph time of 7.1 seconds. That matches or exceeds many of its rivals.

The Sequoia comes in four trim levels (SR5, TRD Sport, Limited and Platinum). For off-road enthusiasts, the Sequoia has a multi-mode, 4-wheel-drive system.

We liked how the Sequoia handled overall. For a big SUV, it maneuvers OK, has a good turning radius, and is easier to park than some similar vehicles.

To offset the lack of sales, Toyota needs to step up and give the Sequoia a makeover. The full-size SUV has a good reputation overall and making some changes should help it maintain that status.