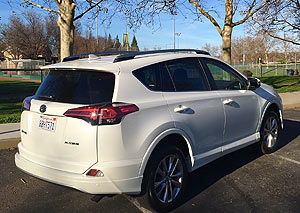 Toyota RAV4 a class leader for more than two decades

Introduced in Japan and Europe in 1994 and a year later a hit in the American market, the Toyota RAV4 has been a class leader for more than two decades.

Identified as the original crossover SUV, the RAV4 has annually been a big seller for Toyota. However, it no longer lords over the class. There was no competition when the RAV4 debuted, but there are many rivals these days.

Although RAV4 was the top-selling compact SUV in 2017, there are plenty of worthy rivals, including the Honda CRV, Hyundai Tucson, Kia Sportage, Subaru Forester, Chevrolet Equinox, Nissan Rogue, and Mazda CX-5. Women seem especially attracted to the compact SUV, which is deemed both cute and sporty.

Toyota did some tinkering with RAV4 the past few years. The biggest news was adding a hybrid model to the lineup. It has also updated styling and some additions to the trim models. Yet a complete redesign, which may come in 2019, is probably a good idea because the RAV4 is getting a little behind the times in some areas.

The 2018 Toyota RAV4 has a reputation for solid versatility because it can haul groceries, carry sports equipment, transport four kids to school, and ease into small parking spaces.

One of the RAV4’s greatest qualities is its cargo space. In fact, the cargo area of 38.4 cubic feet is so large that one might think the RAV4 is a midsize SUV. Drop the second row down and the space is 73.3 cube feet, one of the largest capacities in the class. It can make a sizable hardware store run, and if equipped with all-wheel drive, can handle a trip into snow country.

One area that draws some criticism is the engine. There’s still no V6 option and the lone engine remains a 2.5-liter, four cylinder that produces 176 horsepower and 172 pound-feet of torque. It reportedly goes 0-60 mph in 9.2 seconds. Many of the RAV4’s competitors have gotten larger and more powerful.

While the RAV4 engine isn’t sluggish, several of its rivals offer better performance, giving its potential buyers a choice of a V6 or a popular turbocharged model that not only adds more performance but delivers better gas mileage.

The RAV4 Hybrid is a more robust 2.5-liter, four cylinder with 194 horsepower and 206 pound-feet of torque. The gas mileage (30-34 mpg) is much better than the regular RAV4 (22-28 mpg). All-wheel drive is available on all RAV4 models and standard on the Hybrid.

Even with the four-cylinder engine, the RAV4 and its six-speed automatic transmission still possess enviable qualities. It labors a bit on steep grades, but makes up for that lack of specific power with its solid handling, quiet ride and ability to accelerate in freeway passing situations.

The RAV4 has a modern interior design that features many soft-touch surfaces that add to its overall comfort. Seating is spacious for a compact SUV, offering good leg and head room in front and back.

Although there are no complaints with overall quality, some may feel Toyota’s Entune audio system could be more simplified. And the RAV4 is still not compatible with Apple CarPlay or Android Auto.

Even though the RAV4 is due for a complete redesign, it remains a high quality compact SUV that is strong in many areas. It offers comfort, features an appealing exterior, handles well, is reliable, and also has great resale value.