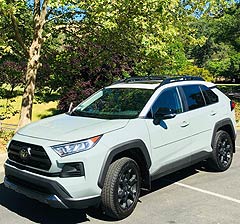 Roseville, CA- There’s no disputing that Americans love their compact crossover sport utility vehicles. These smaller SUVs offer a lot of versatility, typically have an appealing design, and are also somewhat sporty.

Introduced in Japan and Europe in 1994 and a year later a hit in the U.S. market, the Toyota RAV4 has been a class leader for more than two decades. A check of the numbers reveals that sales of the RAV4 have been 132,000 or more the past 14 years.

RAV4 sales has really skyrocketed the past three years when it was the best-selling compact SUV in the U.S., surpassing 407,000 annually. The RAV4 had a record-number of sales (448,068) in 2019, beating out perennial rivals the Honda CR-V and Nissan Rogue. Other competitors include the Mazda CX-5, Hyundai Tucson, Kia Sportage, Subaru Forester and Chevrolet Equinox.

Despite its huge success, Toyota did some serious tinkering with the RAV4 the past few years. The biggest news was adding a hybrid and an electric vehicle to the lineup. Because the RAV4 was getting a little behind the times in some areas, Toyota also id a complete redesign a year ago, making improvements in performance, exterior styling, and adding more technological and safety features.

One of the RAV4’s greatest qualities is its cargo space. In fact, the cargo area of 37.5 cubic feet is so large that one might think the RAV4 is a midsize SUV. Drop the second row down and the space is 69.8 cube feet, one of the largest capacities in the class. It can make a sizable hardware store run, and if equipped with all-wheel drive, can easily maneuver its way around in snow country.

We had a week with the 2020 Toyota RAV4 TRD and came away impressed, even though there was no official off-roading. The TRD comes equipped with all-terrain, 18-inch tires, an off-road-tuned suspension, unique black trim elements, TRD-tuned suspension kit with red coil springs, power liftgate, and sunroof.

Although the engine has been improved, note that several RAV4 rivals provide better performance and offer a more powerful engine as an upgrade. The lone engine is a 2.5-liter, four-cylinder that generates 184 pound-feet of torque and 203 horsepower.

While not quick from a standing position – 0-60 mph in 9.1 seconds – the RAV4 delivers steady power and experienced no issues in passing other vehicles on the freeway or mountainous stretches of highway. The fuel economy (26-35 mpg) is near the top of its class.

We like how the RAV4 handles and it comes with an array of safety features, including lane keeping assist, forward collision mitigation with automatic braking, and adaptive cruise control.

There’s plenty of reasons to be enamored with the RAV4 interior; it’s both comfortable and spacious. We applaud the interior set up that’s fairly easy to master. Control knob placements make sense and there are no cheap, hard plastic materials to detract from the overall appeal. Apple CarPlay and Android Auto are now standard.

A smart redesign a year ago has helped keep the RAV4 where it has always been – near or at the top of the extremely competitive compact crossover SUV class.