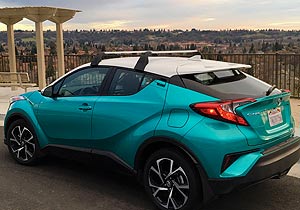 Toyota C-HR a stylish ride for the millennial crowd?

Roseville, Calif.- When the Scion brand was discontinued in August 2016 by Toyota, the Japanese automaker found itself in a little dilemma.

The lingering question became what was Toyota going to do with some of the vehicles it developed for Scion, which was known for its quirky-looking vehicles that were designed primarily for young car buyers?

One such model was the C-HR. Its exterior has been called “insect-like,” perhaps an endearing term under the Scion umbrella but far from the mold of a typical Toyota. Note that the Scion brand did attract younger buyers. The average age was 36 and 70 percent of them had never purchased a Toyota before. However, Scion had little or no appeal to the typical Toyota buyer.

The company has taken a little gamble with the all-new 2018 Toyota C-HR, a subcompact crossover sport utility vehicle that is similar to a hatchback. Americans have stopped buying hatchbacks, so why design a car that is reminiscent of one? Yet Toyota isn’t the only one making cars like this. Rivals of the C-HR include the Honda HR-V, Mazda CX-3, Kia Soul and Jeep Compass.

From this vantage point, the C-HR remains a relatively inexpensive vehicle (starts at roughly $23,500) for the millennial crowd and will probably get overlooked by mainstream Toyota buyers. The allure for many might be the look. Toyota did a nice job picking colors – our version was the very visual “radiant green mica.”

The C-HR, which features the same underpinnings as the new Toyota Camry and the Prius, comes in just two trim models and only one engine. The base model (XLE) has a generous package of standard features, while the XLE Premium adds a little more luxury and safety features for approximately $2,000 more.

That engine is a 2.0-liter, four cylinder that generates 144 horsepower and 139 pound-feet of torque. The front-wheel drive C-HR has a continuously variable automatic transmission (CVT). The C-HR won’t get you there in a big hurry – it’s been clocked going 0-60 mph in a lackluster 10.8 seconds. Despite the sluggish acceleration, we thought the C-HR did fine in freeway passing situations and didn’t labor much climbing modest hills.

The stylish design suggests that the C-HR could be sporty; an indeed the small crossover SUV can deliver some fun. It possesses a nimble feel in challenging turns, giving the driver a nice feel for the road. One thing that will make many drivers a bit uncomfortable are the blind spots due to the small rear window. This makes the standard rearview camera even more valuable.

There are good and bad issues with the interior. Manufacturing a vehicle for millennials, one expects Toyota to provide desirable techy features like Apple CarPlay and Android Auto in the standard package. However, that’s not the case. There is a 7-inch touch-screen infotainment system and the control layout was smartly done with good quality interior materials.

The front seats are cloth-covered and offer good support and comfort. There’s solid headroom for all five people. But the C-HR back seat is lacking somewhat in leg room. The cargo space is 19 cubic feet.

From an appearance perspective, the new 2018 Toyota C-HR should attract its intended target – young people. However, that same stylish appeal may not be appreciated by older car buyers. We’ll have to wait and see if Toyota enjoys overall success with the C-HR.