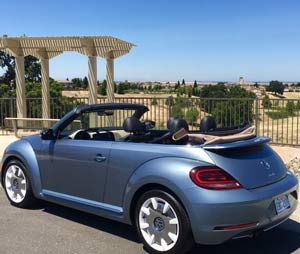 Roseville, CA- Have we seen the last of the iconic Volkswagen Beetle? For the second time in seven decades, the folks at Volkswagen are bidding farewell to this cute, two-door sedan that has won the hearts of many during its long run.

If you have plans to purchase a new Beetle, better do it now. The 2019 Volkswagen Beetle will end production later this month (July 2019) at its Mexican plant.

The Volkswagen Beetle first came to the U.S. in 1949. The Beetle hit its high mark in sales, a whopping 399,674 in 1968, but plummeted to 9,932 a decade later. The front-wheel drive Golf hatchback succeeded the Beetle in 1974, ending its 25-year run. But in a stroke of retrospective genius, Volkswagen reintroduced the “New Beetle” in 1998 on a Golf platform with the styling identical to the original that enjoyed its greatest success in the U.S. during the 1960s.

The unassuming Beetle came in fourth in the 1998 Car of the Century competition among the most influential cars of the 20th century, trailing only the Ford Model T, the Mini and the Citroen DS. Despite its historical impact, gradually Beetle sales declined to 14,411 in 2018, leading to a decision to shut it down for a second time.

However, don’t dig the Beetle’s grave just yet. At some point, there could be another resurgence. Volkswagen is introducing a retro-inspired minivan – the I.D. Buzz – built on the brand’s new electric-car platform. Company officials say they will consider producing a new electric Beetle using the same platform.

In the final Beetle go around, car buyers will have their choice of a coupe or convertible (Cabriolet). The Coast and Dune trim levels were dropped from 2019 lineup. The Beetle starts at approximately $23,000 for the SE coupe and the price hikes to $30,000 for an SEL convertible.

The Volkswagen “bug” has been labeled a cute car forever – an unabashed attempt by Volkswagen to say look at me. And that hasn’t changed. Many women still swoon at the sight of the modern-day Beetle, a somewhat quirky car that has retained its very recognizable curvaceous shape.

All 2019 Beetles are equipped with the same engine, a turbocharged 2.0-liter, four-cylinder that generates 174 horsepower and 184 pound-feet of torque, and is paired with a six-speed automatic (there is no manual transmission version). Driving the front-wheel drive Beetle is more compelling than ever. It delivers solid acceleration and possesses good passing power, giving it that fun factor that goes well with its exterior appeal.

While the Beetle is sporty and fun to drive, there are complaints with the steering responsiveness. Still, the Beetle is quite enjoyable on drives around town and the overall handling is fine for a compact vehicle. We’ve never been comfortable from a safety perspective when driving the convertible. And that hasn’t changed. The rear visibility is compromised due to a small window surrounded by the convertible top.

The Beetle offers a basic interior design that’s smartly put together. The infotainment system is intuitive with knobs located a convenient distance from the driver. The interior includes several storage bins and a center console, but they are all rather small. Front seat folks will enjoy comfortable seating and solid leg and head room. However, squeezing into the back seat is unpleasant and both head and leg room is not good for adults. The small convertible trunk (7.1 cubic feet) also has an awkward opening.

The 2019 Volkswagen Beetle will be departing this year, so this is the final opportunity to purchase a new model. It still delivers in many areas – exterior appeal, solid performance and interior makeup. The next time we see the Beetle it will likely be an electric vehicle.