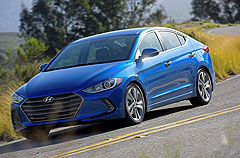 Roseville, Calif. – Just because a vehicle goes through a redesign, don’t assume that means new is better. In some instances, that’s not true.

However, that’s not the case with the 2017 Hyundai Elantra. Give it up for the Hyundai engineers, who equipped the redesigned Elantra with three new engines, a freshened exterior styling, added a seven-speed dual-clutch transmission, and improved the interior.

For knowledgeable Hyundai folks, the new bolder designed Elantra went from being an appealing looking compact sedan to a larger midsize car. Hyundai managed to do this by making the Elantra only about an inch longer and wider.

A redesign took away the vehicle’s somewhat bold curves and replaced them with a more conservative look that resembles the popular midsize Hyundai Sonata.

Of course, bigger doesn’t always mean more expensive. So, no worries concerning the price – it’s still in the compact range. The 2017 Elantra starts at just over $17,000 despite adopting the industry trend of putting high-end equipment in compact cars.

New this year is the Elantra Eco model. Test driven here, we were impressed with its peppy engine and great gas mileage.

The Eco has a turbocharged 1.4-liter, four-cylinder engine that produces 128 horsepower and 156 pound-feet of torque. It has a seven-speed automated manual transmission that operates like an automatic. The Eco gets an estimated 32-40 mpg; more than the SE and Limited (26-32 mpg) models.

The SE and Limited versions feature a modest 2.0-liter, four-cylinder engine that generates 147 horsepower and 132 pound-feet of torque. There’s nothing quick about this engine — 0-60 mph in 9.5 seconds.
The other engine choice is a good one. The Elantra Sport is a turbocharged 1.6-liter, inline-4 that produces 201 horsepower and 191 pound-feet of torque. Fuel economy is 22-33 mpg.

The Elantra interior is more comfortable than ever before and the overall layout offers additional high-end equipment, like a very user-friendly touchscreen. The interior roominess is about the same for front and back seat folks, while the trunk is reduced slightly from 14.8 cubic feet to 14.4.

Although the Elantra is lacking in overall performance and the base model doesn’t provide much of a fun factor, it makes up for that shortcoming by providing good driving mannerisms. The ride is quiet and composed at any speed. The Elantra also delivers solid stability and good braking.

Since 2011, the Elantra has been included among the elite compact vehicles -Honda Civic, Ford Focus, Nissan Sentra and Toyota Corolla. While the current redesign is a good one, the Elantra’ s improvements have not elevated it to an elite level.

It still can’t match the fuel economy of the Mazda 3 or the Honda Civic, and doesn’t possess as much room as the Toyota Corolla or the Civic.

There are many enviable qualities to the 2017 Hyundai Elantra. They include comfort, value, appearance, driving capability and user-friendly technology. Although the Elantra doesn’t reside at the top of the compact class, it does keep inching closer.