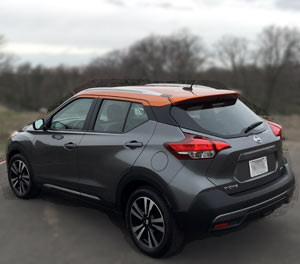 The Japanese auto manufacturer loves its SUVs, but isn’t afraid to cut ties when one of them doesn’t make the grade. That happened a year ago to the controversial Juke, a funky-looking subcompact SUV that was replaced by the 2018 Nissan Kicks.

Presumably, the main reason for the Juke’s departure was sales. They had dwindled dramatically since the Juke became a car-buying favorite in 2011 as one of the inaugural offerings in the subcompact crossover SUV class. But as these tiny SUVs grew in popularity, the Juke’s sales eventually diminished.

Juke sales were nearly 36,000 when first introduced. They reached a high of more than 38,000 by 2014, yet three years later Juke sales in the U.S. dipped to approximately 10,000. The result was Nissan pulling the plug for 2018. Reportedly it is being reworked at Nissan’s design center in London and will come out later this year as a 2020 model. However, the Juke is not expected to be offered in the U.S.

That comes as no disappointment here. We never embraced the Juke’s eccentric look and favor the new Nissan Kicks, a more conventional-looking SUV with a bit more size. The Kicks more than doubled Juke sales (23,312) in year one as Nissan’s new entry-level SUV.

The Kicks quickly got noticed a year ago by its competitors, arriving with a lower sticker price than many of its rivals and also having good fuel economy and a larger cargo area. It also possesses a pleasing exterior design. It has a cool black finish on its rear-window pillar and is available in 17 different two-tone color schemes – so take your pick.

Speaking of picks, there isn’t one regarding the engine. The lone offering is a modest 1.6-liter, four cylinder that generates 125 horsepower and 115 pound-feet of torque. While the engine appears unimpressive, it works OK for the Kicks, due to its light weight (2,643 pounds).

The Kicks motors around town pretty well and goes 0-60 mph in 9.7 seconds, making it middle of the road among its subcompact rivals. However, with a full load of passengers or traveling up a steep grade the power is lacking. Note that the Kicks does have a sport mode.

One of the most endearing qualities of the front-wheel drive Kicks is how it drives. It has a great tight turning radius that makes it simple to park and maneuver. Two strikes against the Kicks is there’s no all-wheel drive option and there have been complaints that braking power is better in other subcompacts.

Nissan took a no-nonsense approach when designing the interior. Even though there’s some solid technology, the Kicks is very straight-forward and its 7-inch touchscreen is user-friendly. We don’t like that the Kicks has no center console, although it does have a driver armrest. It does have a wonderful audio system.

Comfortable seating and room are a mixed bag. Although there’s plenty of room and the seating is comfortable, the driver position is on the high side. The Kicks’ backseat can accommodate three people, yet two large individuals feel like a squeeze. Cargo space is great for the class at 25.3 cubic feet and increases to 32.3 when the back seat is folded down.

Overall, the 2018 Nissan Kicks is an improvement over the Juke. It gives Nissan a solid entry in the subcompact crossover SUV class, thanks primarily to its low sticker price and appealing exterior.