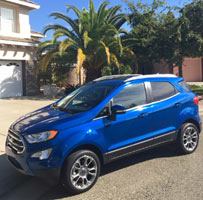 Ford EcoSport: Too Many Negatives

With gas prices rising, especially in California, offering a five-passenger subcompact crossover SUV like the EcoSport makes sense. Not surprisingly, the subcompact SUV class was the fastest-growing segment in 2017.

However, this pint-size SUV isn’t that great on gas. The base model gets 27-29 mpg and the larger engine EcoSport is even less economical (23-29 mpg).

Ford’s primary intent was offering an SUV that’s both sporty and good on gas. And we feel that neither goal was accomplished.

Although it’s being offered in U.S. markets for the first time, the EcoSport is not exactly a new vehicle. Ford has been manufacturing it for years and selling it in Indian and South American markets.

The EcoSport is smaller than any of its primary competitors: Jeep Renegade, Chevrolet Trax and the Honda HR-V.

The EcoSport is Ford’s smallest SUV and resides a notch below the Escape in the company’s SUV lineup. The EcoSport is 16.8 inches shorter in length and has a 6.7-inch smaller wheelbase than the Escape.

We were not impressed with the EcoSport’s performance; even the larger of the two engine choices was rather sluggish. And the vehicle is even slower with two or more passengers aboard.

The model test driven here for a week was a 2.0-liter, four cylinder that produces 166 horsepower and 149 pound-feet of torque. Because the EcoSport is a small SUV, the engine would seem like a good fit, yet performance is lacking, evidenced by it going 0-60 in 10.1 seconds.

The base model EcoSport is a turbocharged 1.0-liter, three-cylinder engine that generates 123 horsepower and 125 pound-feet of torque. It’s also pokey, going 0-60 in a lackluster 10.6 seconds. Both engines utilize a six-speed automatic.

What’s nice about driving the EcoSport is its size. The tiny SUV is very maneuverable and makes pulling in and out of tight parking spots stress free. Although not sporty or fun in nature, the EcoSport handles well, is fairly quiet, and offers a solid overall ride.

Due to its size, the EcoSport has some issues with the interior. But overall, it’s fairly well designed and matches up with its competition.

One major plus with the interior is the EcoSport features the latest in entertainment technology. All but the base model has a sizable 8.0-inch touchscreen. Standard features include Apple CarPlay and Android Auto integration.

The driver’s seat is somewhat high and provides good visibility. Front seat folks have average head and leg room. That’s not the case in the back, where seating is extremely cramped for three adults with leg and head room an issue.

The EcoSport cargo space is 20.9 cubic feet, which is ample for the class. The rear door doesn’t open straight back, an aspect that is not appreciated here, having the door swing out and off to the left side is inconvenient.

We see too many negatives with the EcoSport, so don’t expect it to be a large seller for Ford. Gas mileage is one of several areas that need improvement.