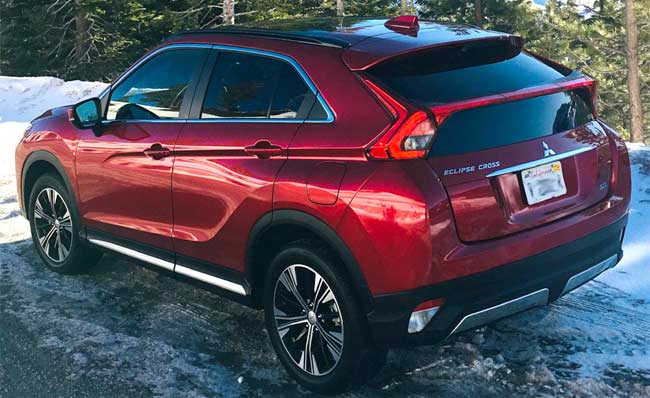 Roseville, CA- The offerings in the automobile world are numerous and constantly changing. So, one may question why Mitsubishi went four years without introducing a new vehicle?

And once the Japanese manufacturer did unveil a new product, it did so with a familiar name. The Eclipse was compact sport coupe that Mitsubishi sold from 1990-2012. It had some good years, including sales of 72,041 in 2002. But two years later, Eclipse sales plummeted to 19,361 and never exceeded 33,003 over the next nine years.

Despite its namesake, Mitsubishi decided to reuse it when the new compact sport utility vehicle – the Eclipse Cross – came out in 2018. Mitsubishi not only took a gamble on the name; it also rolled the dice with a somewhat edgy design.

The Eclipse Cross has a rear window that is annoyingly split by a rear spoiler deck and a long, thin brake light. It’s not only distinctive, it’s distracting, and greatly hampers rear visibility. The Eclipse Cross rear bears resemblance to the much-maligned Pontiac Aztek, a crossover that sometimes gets mentioned on a list of top-ten ugliest cars of all-time.

Let’s hope the Eclipse Cross has a better fate than the Aztek, a risk that normally conservative GM took that absolutely backfired. People hated the look and the Aztek had a very short run (2001 to 2005).

For the record, we like the appearance of the 2020 Mitsubishi Eclipse Cross. It has a sculpted overall look and uses some bold angles. Although not a fan of its limited rear view, we think it has a cool style that will probably give it a much longer shelf life than the Aztek.

Yet there is no easy path to success for the Eclipse Cross. It had modest U.S. sales figures of 19,661 in 2019, a mark that doubled the number of vehicles sold in its debut year.

The compact SUV has some downside, and that’s not good when residing in a tough class of competitors that includes industry stalwarts like the Toyota RAV4, Honda CRV, and some other notables – Ford Escape, Hyundai Kona, Subaru Crosstrek, Kia Sportage, and Mazda CX-5.

Offered in four trim levels (ES, LE, SE, SEL), the 2020 Eclipse Cross has variety. There are few changes from last year’s model, but the 2020 lineup no longer includes the SEL Premium and GT Touring packages.

Even though its lone engine is turbocharged, the Eclipse Cross doesn’t fare well in the performance department. The engine is a 1.5-liter, four-cylinder that produces 152 horsepower and 184 pound-feet of torque, paired to a continuously variable transmission. It goes 0-60 mph in 8.6 seconds, making it one of the least powerful offerings in the segment.

However, on a ski trip to Lake Tahoe, the Eclipse Cross did just fine. It didn’t have tremendous freeway passing capability on the challenging mountainous drive, yet it didn’t labor on steep grades. It should be noted that the Eclipse Cross no longer has standard all-wheel drive for most trim levels. Fuel economy is a bit below average for the class at 26-29 mpg.

Mitsubishi gave the Eclipse Cross a soft suspension, so the handling could be better on challenging roads. The steering does have a light touch and is easy to maneuver in tight spaces and parks with no problem.

The five-seat Eclipse Cross interior is fine overall. There has been criticism in the degree of difficulty getting acquainted with the 7-inch touchscreen, but we experienced no major issues. Seating is pretty roomy and comfortable. The three rear seats not only slide but also recline. The cargo area is 22.6 cubic feet and stretches to 48.9 when the rear split seats are folded down.

If the look of the 2020 Mitsubishi Eclipse Cross is appealing, the starting sticker price ($23,100) should be enough of a draw to at least give this compact SUV a look.