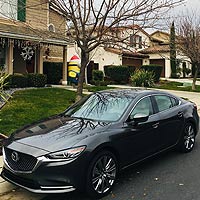 Roseville, CA- If shopping for a midsize family sedan, make sure to check out all the offerings, because it’s stocked with some great vehicles.

Although the Honda Accord and Toyota Camry have been industry standouts for years, there are more than a half dozen other midsize sedans that demand a good look.

One of those midsize sedans is the 2019 Mazda6, which features many enviable qualities, including styling, family-friendly interior space, affordability, plus solid fuel economy and performance.

Besides the Accord and Camry, other notable players in the fiercely competitive midsize sedan class are the Ford Fusion, Nissan Altima, Hyundai Sonata, and Kia Optima.

The Mazda6 certainly cemented its inclusion in this exclusive club with some broad improvements for the 2018 model. The changes included adding an impressive turbocharged engine, doing an exterior facelift and making smart interior refinements.

An attractive new grille with standard LED headlights was another major plus for the Mazda6, which is wider, lower and more aggressive than previous models. The combination gives the sedan even more curb-appeal.

Despite the improvements, sales have dropped for the Mazda6. The brand has just under 20,000 in sales with one month left in 2019. The decline in sales continues. This will be the fifth straight year that the Mazda6 has experienced declining sales. The 2018 sales mark was 30,938, which is quite the dip from sales of 57,898 in 2015.

We were particularly pleased when Mazda finally added a second engine last year. There’s still no V6 option, but the turbo model was a welcome addition and should be seriously considered. Even though the price of the base model is attractive, that means going with the less performance-laden turbo engine.

The turbo 2.5-liter, four-cylinder generates 250 horsepower and 310 pound-feet of torque. It has lots of initial power, clocked at 6.4 seconds in 0-60 mpg testing. The Mazda6 is only the automaker’s second model to install the turbo-four engine. The other one is the CX-9, a three-row sport utility vehicle.

The Mazda6 base model comes equipped with a 2.5-liter, four-cylinder engine that produces 187 horsepower and 186 pound-feet of torque. For car buyers who are real gas conscious, this model gets 26-35 mpg, an improvement over the turbo engine (23-31 mpg). Note that the front-wheel drive Mazda6 has no all-wheel drive option.

What hasn’t changed much is the way the Mazda6 performs. It has a great reputation for its athletic prowess and handles superbly, especially through corners. Drivers will possess a great deal of confidence and find the Mazda6 delivers quite well in the “fun” department.

There’s also much to admire regarding the Mazda6’s interior. One of the biggest additions two years ago was the seats were redesigned for improved comfort, which Mazda says limits fatigue on long drives. Head and leg room are excellent, even when the optional sunroof is purchased. Rear seating and the cargo area (14.7 cubic feet) are about average for the class.

The Mazda6 has a luxury feel, thanks to the 2018 additions. The dashboard was redone and mastering the central control knob is the key to easing any frustrating technology issues.

Historically a revered sedan, the 2019 Mazda6 is a solid entry in the competitive midsize sedan class. Adding the turbo engine was a great idea that provides car buyers who put a high priority on performance an option that was never previously available. Interior improvements and an attractive exterior add to the overall product.