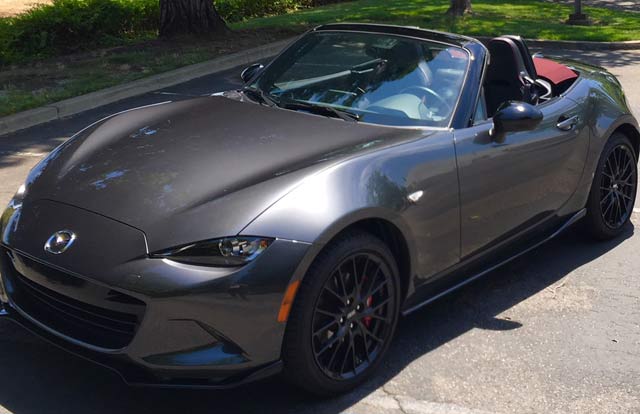 Miata is driving for pure enjoyment

Roseville, Calif.- One of the standard bearers in the convertible category for many years has been the Mazda MX-5 Miata.

While certainly not the most practical purchase because it’s tiny, not extremely powerful, has virtually no trunk space, and can get rather noisy at high speeds, the Miata continues to be an appealing sports car.

The primary consideration for people who want to buy a convertible: Fun. No doubt, it can be considered a rather selfish approach to buying an automobile. Yet it remains a guideline for folks who like the top down, wind blowing slightly in their face, and taking drives for pure enjoyment.

The Miata delivers big time in the fun department. Other than the Fiat 124 convertible, the Miata really has no competition in its class.

Reminiscent of the British roadsters of the 1950s and 1960s, the Miata is a rear-wheel, two-seat convertible that delivers precise handling. The driver has a tremendous feel in a Miata because the steering is immediate and very accurate.

The 2018 Mazda Miata is two years removed from a major redesign, yet the changes are mostly insignificant.

For 2018, the Miata updates include advanced keyless entry as a standard feature in all models. A few new additions are options that will add to the sticker price. The only notable change in 2017 was the addition of the Miata RF (retractable fastback), which has a folding hardtop roof. It folds down and back up effortlessly with the push of a knob.

Other Miata models feature the standard manually retractable, black soft convertible top with a glass rear window. Even though it’s a do-it-yourself convertible, most people will find they can pull the top down and back up without ever leaving the driver’s seat.

The “new” Miata is smaller than its predecessor, weighs slightly less, and isn’t as powerful (12 less horsepower). Yet no worries regarding performance because the 2018 Miata has one solid engine, a 2.0-liter, four cylinder that generates 155 horsepower and 148 pound-feet of torque.

Because the redesigned model has roughly 200 pounds less pounds to push, it goes 0-60 in 6.3 seconds, a half-second quicker than any previous Miata. Gas mileage ranges from 26-35 mpg. A petite roadster, the 2017 Miata is just over 154 inches in length and weighs about 2,350 pounds.

Regardless of where you go, the Miata will zip around turns easily and give the driver a feeling of total control. If you don’t know how to drive a stick, it’s worth learning because shifting gears will bring increased enjoyment. The six-speed manual is an easy clutch to master, while the optional six-speed automatic has steering wheel paddle shifting.

The Miata interior no longer has an abundance of hard plastic material. The cabin layout remains pretty basic, devoid of practically any storage space. There’s not even a glove compartment and the trunk is miniscule (4.6-cubic-foot), although no one buys a sports car with cargo space a primary concern.

But this two-seater offers solid leg and head room for average-size drivers and their companion. Another positive is the USB connectivity and Bluetooth phone and audio are standard equipment, plus the touchscreen doesn’t require a session in the driver’s manual to master.

Regardless of the motive, purchasing a Mazda MX-5 Miata is probably not going to lead to any regrets. If driving a relatively inexpensive convertible for fun is the desired goal, you’ve come to the right place.