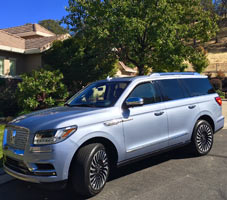 Roseville, CA- For a decade, the Lincoln Navigator remained virtually unchanged. Other than a few minor tweaks and changes most years, the Navigator was literally stuck in neutral as the competition passed it by.

So, we’re pleased to see this full-size luxury sport utility vehicle arrive this year with a complete redesign. Long overdue, the new-look 2018 Lincoln Navigator has moved from the middle of the pack to near the top of the class, according to many auto experts. This is where the Navigator started when introduced by Lincoln in the 1990s as the first full-size luxury SUV.

For starters, the 2018 Lincoln Navigator looks rather stylish and regal. And it should, considering the sticker price starts at around $72,000 and can rise to nearly $100,000 with a lot of extras. We drove the attractive crystal-blue Navigator and several people remarked about how cool it looked. The exterior changes include a massive new grille with LED headlights.

More significantly than its freshened exterior is what’s under the hood. The engine is now a turbocharged V6 that has a new 10-speed automatic transmission that replaces the aging six-speed automatic. The Navigator is certainly quicker than it looks and the turbo engine has improved both acceleration and fuel economy. Sluggish acceleration and poor gas mileage were primary complaints over the years.

There are also multiple changes to the Navigator interior, which is extremely spacious and comfortable for seven to eight people, and is equipped with some new technology that was overdue.

What hasn’t change with the Lincoln Navigator is it’s still gargantuan. It weights nearly 6,000 pounds and the four-wheel drive version can tow up to 8,700 pounds. Despite its size and power, this super-sized SUV is not designed for off-roading. It has large wheels and the differentials don’t have a locking feature. The Navigator does have hill descent assist, but that’s designed primarily for heading down slippery, steep slopes.

Lincoln is Ford’s luxury brand. The Navigator has just one engine and the majority of the underpinnings are shared by its cousin – the Ford Expedition. The new engine is a turbocharged 3.5-liter, V6, that generates 450 horsepower and 500 pound-feet of torque.

The Navigator can travel 0-60 mph in 5.5 seconds and gets decent gas mileage for its size (16-23 mpg). Lincoln says regular fuel is fine, but others suggest premium gas should be used in towing situations.

Despite its size, the Navigator has some admirable driving traits. Driving the large SUV is not overbearing or clumsy like some large vehicles, even though it remains a truck-based SUV. No one purchases a big SUV because of its handling, yet the Navigator delivers solid handling for its size.

The steering is solid and it has a composed ride that’s suitable for around town and OK for challenging, tight roads. The Navigator remains tough to maneuver in tight spaces, but all large SUVs share that trait.

The Navigator has a sharp-looking interior and is modernized with lots of high-tech features, yet can be deciphered and feel intuitive after a short amount of time. There is an abundance of premium materials that one expects in a luxury vehicle. The Navigator has a10-inch touchscreen display, Syn 3 interface, and comes standard with Apple CarPlay and Android Auto compatibility.

The overall seating is excellent. There’s lots of leg and head room up front and the same can be said for the standard second row of captain’s chairs. The second row can tilt and slide forward, plus passengers have access to many of the SUV’s features like sound system and temperature controls. Even the third row offers solid comfort.

Lincoln receives high marks for the overall redesign of its flagship vehicle. The 2018 Lincoln Navigator is much improved and slides up the ladder to put itself once again among the elite of the large luxury SUV class.