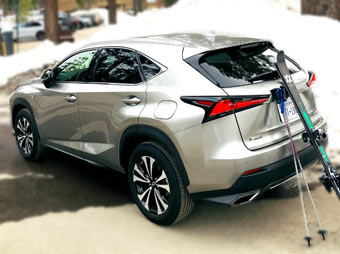 Roseville, CA- An upscale compact sport utility vehicle, the hybrid version of the NX 300 lacks solid performance and is pokey. That was our opinion when sampling the 2020 hybrid model. We were much more pleased with the standard version of the NX that has a turbocharged engine and delivers good performance.

Americans now have a preference for compact and subcompact SUVs. These crossover SUVs are smaller than traditional ones; possessing tinier engines, yet still deliver the preferred sedan-like ride. The choices are so numerous – every auto manufacturer typically has multiple crossover SUVs in their fleet of vehicles.

That’s certainly true of Toyota and its luxury division, Lexus. One of those choices is the 2021 Lexus NX 300, which debuted in 2015. It’s not perfect, but overall it has a favorable rating with numerous strengths that put it among the list of small SUVs to be considered.

The standard NX has one engine, a front-wheel drive turbo 2.0-liter, four-cylinder that generates 235 horsepower and 258 pound-feet of torque. Paired with a six-speed automatic transmission, the NX goes 0-60 mph in 7.0 seconds – average among compact crossover rivals with turbocharged four-cylinders.

We loved how it performed on a ski trip where the roads didn’t require all-wheel drive, an option with the NX 300. It was primarily left in “economy” mode the entire trip and had absolutely no lack of power while navigating some steep passes and challenging terrain.

The interior gets downgraded due to regular complaints about the frustrating touchscreen (similar to one on many laptop computers) that’s paired with a standard 8-inch display. But there’s still plenty to like about the sleek interior setup that has synthetic leather upholstery and 10-way power-adjustable front seats. There’s lots of head and leg room up front and the rear seats provide comfort for three children or two adults.

The NX is about average for cargo area – 17.7 cubic feet that expands to 54.6 cubes with the second-row seats folded down.

While it does have a few issues, overall the 2021 Lexus NX 300 is strong in many areas. It has good performance, offers comfortable seating on even long drives, has an attractive appearance, and gives the driver a strong feeling of confidence in all situations.