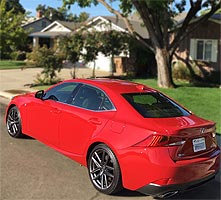 Underwhelming performance from Lexus IS 350

Roseville, CA- Looks can sometimes be deceiving. A first glance at the attractive 2019 Lexus IS 350 made us think this would be a luxury sedan with lots of power.

Wrongo!! The IS 350 scores points in a number of areas, but performance isn’t one of them. And that’s a little perplexing because the engine seemingly has much to offer. The IS 350 is a 3.5-liter, V6 that generates 311 horsepower and 280 pound-feet of torque.

But get behind the wheel (we sampled the F Sport package) and there’s no major zip, evidenced by the IS 350 being clocked going 0-60 mph in 6.9 seconds, a lackluster time for a luxury sedan. Even though the IS 350’s performance improved quite a bit when the “Sport” mode was employed, for pure speed rivals like the Audi A4 and BMW 3 Series are better options.

Lexus, Toyota’s luxury division, introduced the IS line late in 2013. The vehicle was updated in 2016 and three years later it feels like another redesign would be a good idea. Note that the IS 300 is less powerful than the 350 – its engine is a 3.5-liter, V6 with 260 horsepower. Neither version of the IS offers any true excitement.

We were more impressed with the IS 350 from a visual standpoint. It has a low, athletic stance and the big trapezoidal grille and LED lights give it plenty of road appeal, providing an elegant and sporty appearance. The IS 350 clearly favors looks and comfort over athletic performance.

Although the performance is underwhelming, the IS 350 rates much higher when it comes to handling. It’s enjoyable to drive and features agile characteristics that show up on challenging roads that we experienced during our week with the IS 350. It also delivers a quiet, smooth ride that can absorb the bumps on a country road.

The IS 350 receives much better marks for its interior, which offers both quality and a smart design. It has a 7-inch color display, and also comes standard with an eight-speaker sound system with an auxiliary audio input, satellite radio and HD radio. The upgraded package is quite impressive, featuring a 10.3-inch center screen, integrated navigation, and a fantastic sounding Mark Levinson, 15-speaker, 835-watt surround-sound system.

Even though the roofline is a bit low and might bother taller drivers, the seating is comfortable overall and very suitable for longer road trips. The back seats aren’t as spacious as the front in terms of legroom, but they are still sufficient for most adults.

There are a couple of issues with the interior. Cargo area is on the small side at 10.8 cubic feet. And the backseat folds down, but the seats don’t fold flat to the floor. The other issue is the mouse-like control for the infotainment system. It’s difficult to use this touchy system and often requires taking a peek at the screen, never a good idea when driving.

Performance is lacking and overall the 2019 Lexus IS 350 falls short in comparison to its major competitors.