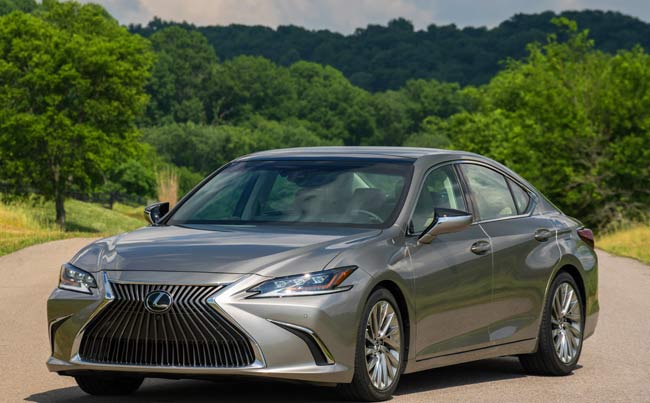 Roseville, CA- What better way to save a little money on a road trip than to drive a hybrid that can really max out the distance for one tank of gas.

Being capable of going more than 550 miles before a fill-up was one primary reason we loved driving the 2018 Lexus ES 300h on a recent trip to the Oregon coast. There aren’t many vehicles that can go that far on a tank of gas. The 300h has two advantages: A sizeable gas tank (13.2 gallons) and the hybrid gets an estimated 43-45 mpg.

Lexus might not be able to outperform its German rivals in terms of outright speed, but the 300h costs thousands of dollars less, and its four-cylinder engine is a good one. And the price is only around $5,000 more than the Toyota Avalon Hybrid. Lexus is Toyota’s luxury brand and there’s no arguing that the 300h has luxurious qualities that the Avalon hybrid can’t match.

Part of the seventh generation of this popular sedan, the 2019 ES 300h is fully redesigned this year. The improvements include fuel efficiency, more safety features, upgraded technology, and additional cargo space.

The ES 300h features a 2.4-liter, four-cylinder engine that pairs with an electric motor for a combined 215 horsepower (up from 200 hp). It receives criticism for a lack of performance, since it only accelerates from 0-60 mph in 8.3 seconds, which is slow by luxury standards.

No one who test drives either ES models will confuse them with the sportier BMW 5 series. But a relatively new suspension and some steering changes have improved the way the ES handles overall. The braking remains good and even at high speeds the ES provides solid handling and a quiet ride. The vehicle has autonomous emergency braking that comes standard.

Driving 500-plus miles along the challenging Oregon coast can be a little exhausting at times. However, making the drive more pleasurable was the comfortable front seating the ES 300h provided. An abundance of soft materials throughout also added to the comfort. The back seat is relaxing as well, offering good leg and head room

Now that the battery has been relocated below the rear seats, the cargo space is much improved, expanding to 16.7 cubic feet. The bad news is the rear seat doesn’t fold down to increase the storage capacity.

We loved the sound of the 10-speaker Mark Levinson audio system and that Lexus is finally offering Apple CarPlay, a real plus on a sizable road trip. But even though the standard 7-inch instrument display screen is very crisp, we aren’t fans of the touchpad mouse that makes operating the infotainment interface more difficult than it should be.

Although the 2019 Lexus ES 300h has some downside, it should please car shoppers who want a highly fuel-efficient, roomy luxury sedan.