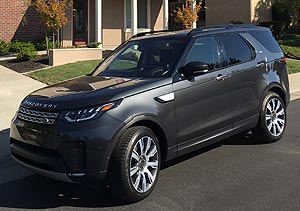 Roseville, CA- Launched in the late 1940s and once considered a British icon, the Land Rover has a proud past.

A longstanding four-wheel drive vehicle, the Land Rover developed quite the reputation for its off-road capabilities. Three years after its debut, King George VI granted the Land Rover a Royal Warrant in 1951. Although the typically box-shaped green vehicles weren’t much to look at, they were great for off-roading of any kind, capable of navigating through a shallow river, plodding along desert sand or climbing boulders.

The modern-day Land Rovers still possesses some fine off-road chops, but they are recognized more as an attractive luxury brand instead of the original moniker as a go-anywhere, do-anything vehicle.

We spent a week with the 2019 Land Rover Discovery. Although no off-the-beaten-track journeys were undertaken, we can vouch for the overall quality of the brand, which has jumped around since being bought by BMW in 1994. Sold in 2008 by Ford, Land Rover is now owned by Mumbai-based Tata Motors, a subsidiary of India’s vast Tata Group corporation.

A luxury midsize sport utility vehicle, the Land Rover Discovery features many fine qualities. It has three rows and is capable of carrying seven people. And the Discovery will do it in style and comfort, making it a terrific vehicle for long-distance family trips.

While retaining the luxury qualities that make it comparable to Audi, Lexus and Cadillac SUVs, the Discovery can still deliver when the going gets tough. It has impressive ground clearance (11.1 inches) that allows it to wade through 3 feet of water, scale large rocks and travel through sand dunes. Standard off-road support includes a traction control system and front and rear tow hooks.

Other than some minor changes to standard and optional features, there’s not much new to the fifth generation of the Discovery that took place in 2017. It comes in three trim levels (SE, HSE, HSE Luxury), but has many optional packages that can enhance the SUV.

The Discovery has two distinct engines. The standard one is a supercharged 3.0-liter, V6 that generates 340 horsepower and 332 pound-feet of torque. A supercharger is an air compressor that increases the pressure or density of air supplied to the engine. Superchargers increase the power, but are not as fuel efficient.

The optional engine is a turbocharged 3.0-liter, diesel V6 that delivers 254 horsepower and 443 pound-feet of torque. Both Discovery engines send power to all four wheels through an eight-speed automatic transmission and reportedly travel 0-60 mph in 7.1 seconds. Other than the fuel economy (diesel gets 21-26 mpg; standard gets 16-21 mpg), the two engines are nearly identical.

Unlike some sizable SUVs, the Discovery doesn’t seem bulky and has no difficulty squeezing into tight parking spaces. It possesses precise steering and a composed drive that people are seeking in a luxury model. The Discovery can haul a big load (towing capacity 8,200 pounds) and has lots of safety features, including lane keeping assist, a driver condition monitor, rear cross-traffic alert, and low-speed automatic emergency braking.

The Ride and Interior

The Discovery provides a comfortable ride, especially for front seat and second row occupants, who have lots of head and leg room. The interior has some real uniqueness, featuring two glove compartments; a console box that can keep drinks cool; a phone cubicle; hidden CD player; and oversized door pockets for additional storage.

What many folks will find annoying concerning the Discovery is the standard 10-inch touchscreen interface that is difficult to operate. Just setting up “favorites” for the radio was a chore in a system that is far more complicated than it needs to be.

The 2019 Land Rover Discovery is a refined luxury SUV with many fine qualities. It has a cleverly designed interior and delivers both performance and comfort.