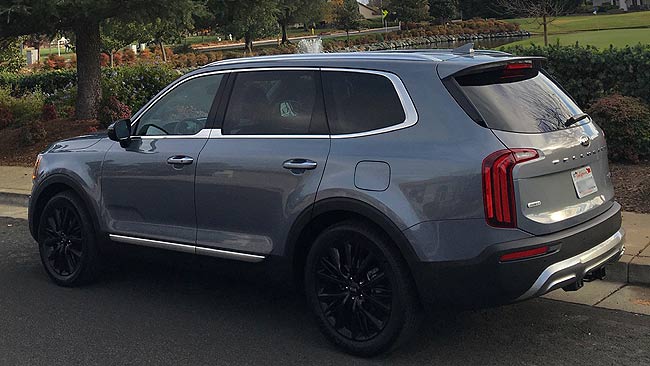 Roseville, CA- The folks at Kia waited quite a while, but finally made the decision to offer another SUV that’s longer and wider than its previously largest model – the Sorento.

The Telluride debuted a year ago as a midsize SUV with a spacious interior and is very suitable for large families. It also offers solid technology and safety features that come with the standard package.

There’s virtually no chance of the Kia Telluride suffering the same fate as the Kia Borrego. Kia was a little late to the party with the truck-like Borrego, a hefty midsize sport utility vehicle that was unveiled late in 2008. A year later, the Borrego suffered from poor sales and quickly disappeared from the Kia lineup.

The 2021 Kia Telluride arrives with no major changes. It remains a smartly-designed SUV that has three rows and can seat up to eight people. It offers solid utility, good performance and handling, and like most Kia vehicles, the Telluride is reasonably priced, starting at just under $32,000. It also comes with Kia’s fantastic drivetrain warranty – 10 years/100,000 miles.

Unlike much of its competition, the Telluride sports a different look. It has a bold, blocky exterior, a rarity in its class. It also addresses two of the Sorrento’s deficiencies – rear passenger space and cargo area. The Telluride’s primary rivals are three established heavyweights in the midsize class – Toyota Highlander, Honda Pilot and Ford Explorer.

The Telluride has four trim levels (LX, S, EX and SX). The engine is an efficient 3.8-liter, V6 that generates 291 horsepower and 262 pound-feet of torque. However, there are no available engine options.

Since the fuel economy is a bit low (19-24 mpg), a turbocharged alternative would be welcomed. New this year is a Nightfall Edition package that adds black-painted wheels and trim.

The Telluride feels a little quicker than its 0-60 mph clocking of 7.3 seconds. The front-wheel drive Telluride can haul up to 5,000 pounds and has all-wheel drive as an available option.

We were impressed with the Telluride’s overall handling capability. Even on challenging roads the steering is firm and there’s good stability, giving the driver lots of confidence maneuvering this relatively heavy SUV.

The interior features a layout that leaves the driver and passengers with plenty of storage options. We’re a fan of the comfy second-row Captain’s chairs, which can be switched out for a bench that seats three people. Head and leg room are better than average in the first two rows, while the third row is typical of many midsize SUVs – more suited for kids than adults.

With all three rows being utilized, the Telluride has a cargo area of 21 cubic feet and expands to 87 with the two rows folded down.

There’s a standard 8-inch touchscreen that functions well and is fairly easy to comprehend. The dashboard sits low and the controls are spread out and require minimal attention, so they don’t interfere with the driver’s attention to the road. There are some hard-plastic surfaces, but they are minimal. Apple CarPlay and Android Auto come standard and there’s an optional driver intercom system.

Kia has done a nice job of designing its new midsize SUV. The Telluride is very family-friendly, is offered at a modest price, and is attractive both inside and out.