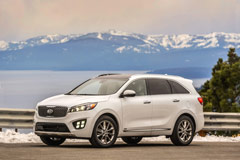 Among the significant changes last year were adding a turbocharged four-cylinder engine to the lineup, upgrading the suspension and improving steering. The overall styling is also improved inside and out.

The Sorento has a smaller model with two rows of seating, but also has a larger version with three rows that can transport up to seven people. It competes primarily against the Toyota Highlander, Ford Explorer, Hyundai Santa Fe, Ford Edge, and Honda Pilot.

Five years ago, Kia transformed the Sorento from a truck-based model to a car-like crossover SUV. The result: the Sorento began delivering a comfortable ride, which is what the majority of midsize SUV owner’s desire.

The 2017 Kia Sorento features a quiet, sophisticated ride that doesn’t seem to be bothered by bumps or uneven surfaces. Every version of the Sorento comes with the Driver Mode Select that features three modes (Normal, Sport and Eco). They were all utilized on a recent trip to Wyoming, where the driving can be very challenging in certain areas.

We love that Kia has equipped the Sorento with three diverse engines. Driven here for a week, the turbo model was impressive. It’s a 2.0-liter, four-cylinder that produces 240 horsepower and 260 pound-feet of torque, and goes 0-60 mph in 8.7 seconds. Gas mileage is 20-27 mpg; just a little shy of the other four-cylinder engine.

One certainly notices a difference in the latest Sorento when seated inside. It has plenty of soft-touch surfaces and the two-tone color scheme makes it quite an attractive design. The interior has user-friendly controls and overall is very intuitive, so the learning curve is minimal.

The Sorento’s very cool second row is fairly large and has the versatility to slide, recline or simply fold flat for additional cargo area. The storage area behind the third row is minimal at 11.3 cubic feet. With the third row down, the cargo area enlarges to 38.8 cubic feet and has a maximum storage of 73.5 cubic feet when the second row is also down. The Sorento is versatile and would certainly be suitable in providing a comfortable family road trip.

The Kia Sorento keeps increasing in price, but it does fit a wide range of budgets and needs. The 2017 Sorento with two rows starts at around $25,000, but can certainly climb the ladder and get way more expensive. Fully loaded, the Sorento SXL lists at around $43,000. No matter what version, the Sorento definitely warrants a look when shopping for a midsize SUV.