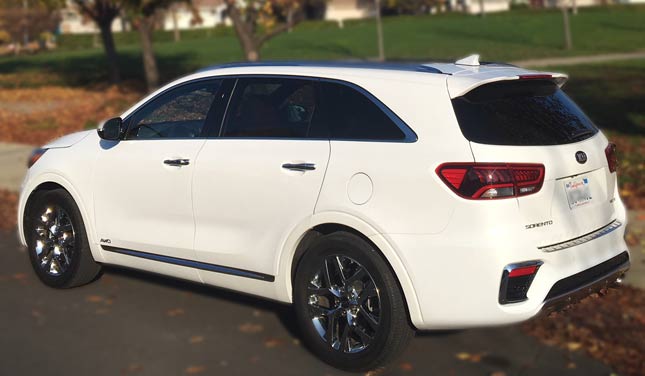 Roseville, CA- There’s annually subtle changes to this popular family-friendly sport utility vehicle. Rarely does Kia not at least tweak the latest version of the Sorento.

And that’s certainly the case with the 2019 Kia Sorento. It’s been refreshed and now offers an eight-speed automatic transmission for the V6, a revised exterior, and more standard features, including the third-row seating.

Perhaps the biggest change is an omission. There’s no longer a turbocharged engine, a disappointment here after our last visit with the Sorento included a turbo engine that we lauded. The new Sorento comes with either a four-cylinder or V6 engine. A diesel engine will be unveiled in 2019.

The Sorento has become a respected, affordable midsize SUV that is one of the few in its class to offer a third row and seats seven people. Sure, the third row is only large enough for kids. But isn’t that the case with many third row SUVs? The attractive-looking Sorento has a smaller model with only two rows of seating.

Kia has continued offering many versions of the Sorento, evidenced by its five trim models (L, LX, EX, SX, SX limited) and the all-wheel drive options.

Among the non-luxury-brand crossover SUVs, the Sorento delivers one of the most refined rides. The ride is top-notch, but performance is not if one chooses the four-cylinder engine that delivers underwhelming acceleration. The 2.4-liter, four cylinder generates 185 horsepower and 178 pound-feet of torque. It’s paired to a six-speed automatic transmission.

The larger Sorento engine has a 5,000-pound towing capacity. Equipped with the AWD system, the Sorento can venture into off-road territory, utilizing an electronically lockable 50-50 front-rear torque split and a not-so-great ground clearance of 7.3 inches.

The Sorento interior has plenty of soft-touch surfaces and an attractive design. The interior has user-friendly controls, including a standard 7-inch touchscreen infotainment system. Overall, it’s very intuitive, so the learning curve is minimal.

The driver has a14-way adjustable seat that offers a good range of movement. Front-row seating is strong overall and so is the second row, which features sliding and reclining seats. The storage area behind the third row is minimal at 11.3 cubic feet. With the third row down, the cargo area enlarges to 38.8 cubic feet and has a maximum storage of 73.5 cubic feet when the second row is folded to the floor.

There are plenty of reasons to like the 2019 Kia Sorento, including its smooth, refined ride, third-row seating, good versatility, attractive exterior, and its modest price.