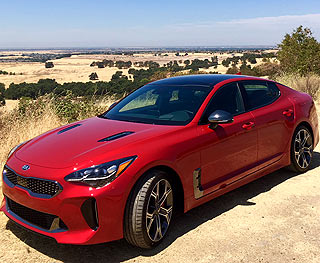 Roseville, CA- The latest addition to the Kia lineup resembles nothing that the South Korean auto manufacturer has ever produced in its 44-year history.

It came as quite the surprise to see Kia step out of normal conservative shell and produce the Stinger, a midsize, four-door hatchback that looks terrific and offers fantastic performance.

The 2018 Kia Stinger has been well received. There’s no reason not to applaud the effort, considering its sporty exterior design and the way it accelerates like many of the luxury European vehicles with lofty reputations.

And another major aspect to admire about the Kia Stinger is the cost. It starts at around $32,000 and the upper-end version goes for roughly $51,500. From this vantage point, those are bargain prices.

The folks at Kia were inspired by fastback grand touring cars of the 1970s, most notably the Maserati Ghibli. The Stinger design is attractive, bold and aggressive. It has a long hood, short front and rear overhang, a sloping roofline, and just looks like a vehicle with tons of get-up-and-go.

We were certainly overjoyed at the opportunity to test drive the upper-level GT2 for a week. One of five trims (base, premium, GT, GT1, GT2), this model was equipped with a twin-turbocharged engine, a 3.3-liter, V6, that generates 365 horsepower and 376 pound-feet torque and delivers some very serious straight-line speed.

Right away the urge is to test this engine. And we did. There was no disappointment, the rear-wheel drive Stinger responds quickly, going 0-60 mph in 4.9 seconds. It was startling to see the speedometer above the freeway speed limit in such quick fashion and without really tramping down on the accelerator.

Although less powerful, the other Stinger engine choice reportedly is no slouch, either. It’s a turbo 2.0-liter, four cylinder that produces 255 horsepower and 260 pound-feet of torque. It goes approximately 0-60 in 6.1 seconds.

While the Stinger’s performance is terrific, the overall handling doesn’t quite match up. And really, considering this is not a luxury car, it shouldn’t be compared with much more expensive European rivals that offer fantastic handling.

We found the Stinger could navigate well around corners, grips the road well, and was surprisingly quiet with virtually no wind noise.

From an overall perspective, Kia did an admirable job with the interior. The Stinger has an attractive look and provides solid comfort and a good mix of technology.

Front seat passengers can expect good leg room and overall comfort. Thanks to the sunroof, which comes standard, the head room might be a bit low for taller drivers. In the back seat, head room is also an issue due to the sloping roofline. Cargo space is 23 cubic feet.

The Stinger has a sharp touchscreen that’s not overly difficult to figure out. The interior is equipped with the latest driving aids. Apple CarPlay and Android Auto compatibility are standard and most models come with a wonderful 15-speaker Harman Kardon audio system.

Kia ratchets up its reputation a little further by adding the 2018 Stinger to its lineup. The midsize hatchback gives Kia an extremely sporty, performance-laden car that should become a good seller.