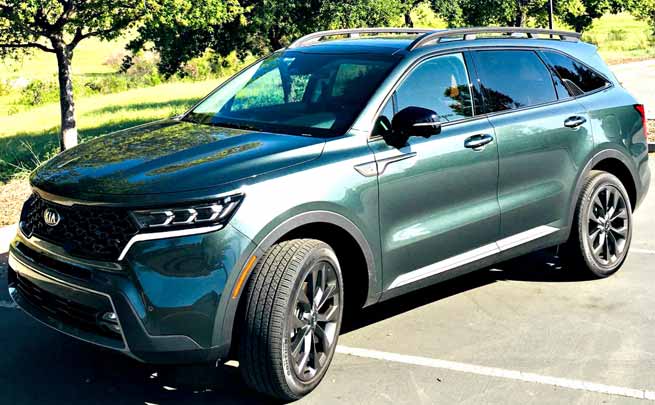 Roseville, CA- Despite its popularity over the years, rarely have the folks at Kia allowed the Sorento to rest on its laurels.

The family-friendly sport utility vehicle has enjoyed steady sales since arriving in 2005. And it’s likely a solid bet the 2021 Kia Sorrento will enjoy another strong sales year, thanks to a full redesign for one of the top midsize SUVs in its class.

The fourth Sorento generation resides on an all-new platform and is larger inside and out. The overall look is boxier and gives the Sorento a bolder styling, a departure from years past when it had a curvier appearance. For car shoppers, more good news is the Sorento can still beat much of the competition with its affordable pricing – starting at under $30,000.

As usual, there’s lots to like about the Sorento. The latest version provides an optional turbocharged engine, comfortable seating, good cargo space, a modernized cabin, and solid ride quality that makes it enjoyable to drive.

Available in five trim levels (LX, S, EX, SX, SX Prestige), the Sorento has become a respected, affordable midsize SUV that is one of the few in its class to offer a third row and seats seven people. Sure, the third row is only large enough for kids. But isn’t that the case with many third-row SUVs?

Kia also offers a smaller model Sorento with only two rows of seating. Note that the Sorento also has a hybrid version and a plug-in hybrid that will be released later this year. With its new look and different configurations, Kia is hoping the Sorento rebounds from disappointing 2020 sales of 74,677, its lowest total in 11 years.

The beefed-up turbo engine was driven here for a week and left us impressed with its acceleration. The turbo 2.5-liter, four-cylinder produces 281 horsepower and 311 pound-feet. It’s much quicker than the standard engine (2.5-liter, four-cylinder, 191 horsepower). The turbo model goes 0-60 mph in 7.2 seconds and tops out at 124 mph. It gets good gas mileage – 22-29 mpg.

The Sorento interior has plenty of soft-touch surfaces and an attractive design. The interior has user-friendly controls, including a new standard 8-inch touchscreen infotainment system and a six-speaker audio system. Overall, the touchscreen is very intuitive, so the learning curve is minimal. Wireless Apple CarPlay and Android Auto smartphone compatibility is standard.

The first two rows of the Sorento deliver comfortable, supportive seating. Head and leg room is above average for the midsize SUV class. The cargo area also gets above average marks, even with three rows. There’s 12.6 cubic feet of space behind the third row. That expands to 45 cubes with the third row down and 75.5 cubic feet when both rows are flat to the floor.

Driving the Sorento over some challenging mountain passes during a ski trip caused no consternation here. It was also composed on several winding roads and the handling was agile and smooth.

There are numerous reasons to like the redesigned 2021 Kia Sorento. Its new bold look is intriguing and it still gets high marks for cargo space, refined interior, good versatility, and comes with modest pricing.