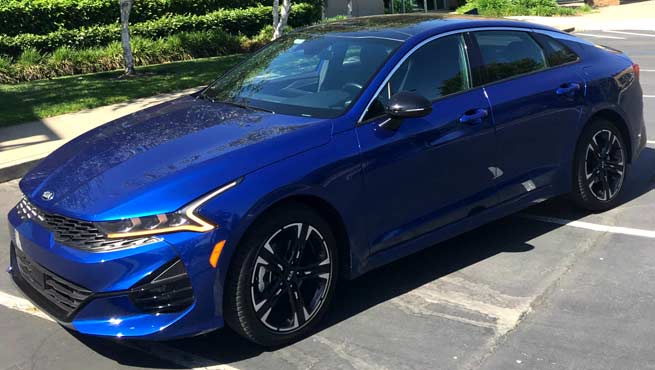 Complete redesign with lot of upside

Roseville, Calif.- The new 2021 Kia K5 GT is one of the rare front-wheel drive cars that delivers considerable performance.

While the standard Kia K5 features a modest engine, the upgraded GT model can get you there in a major hurry, going 0-60 mph in 5.7 seconds. The GT has a top speed of 155 mph, putting it on par with many luxury German sedans.

Kia did a nice job of making the K5 alluring for anyone who values performance. There are two turbocharged engines that both give the front-wheel drive sedan some punch. All-wheel drive is an option with the GT version.

The GT engine is a turbo 2.5-liter, four-cylinder that produces 290 horsepower and 311 pound-feet of torque. It has terrific acceleration, but suffers in fuel economy when compare to the standard K5, getting 24-32 mpg.

The 2021 Kia K5 is a midsize sedan that replaced the Optima. The K5 is more powerful, sportier, features upgraded technology, and is more visually appealing than the Optima. The name change to K5 now matches what the vehicle has always been called in South Korea and China.

Curbside appeal is evident in a competitive class that typically lacks imagination among its perennial leaders – Honda and Toyota. The K5 is 2 inches longer and 1 inch wider than the Optima and resembles some luxury models with its fastback-like profile.

The sedan has some nice curves and lightly slopes from front to back. Up front is a textured grille that is surrounded by LED headlights. Its appeal is enhanced by a chrome strip running along the window line. The K5 has five trim levels (LX, LXS, GT-Line, EX, GT).

The GT model is really fun to drive. It’s also sporty in terms of handling and offers a composed and relatively quiet ride, even at high freeway speeds.

Kia also did a fine job of recreating the interior by modernizing the cabin with more technology, increasing soft-touch surfaces, and making it more user-friendly overall.
Wireless Apple CarPlay and Android Auto come standard and the 8-inch touchscreen makes sense and is easy to master.

Both rows of seating provide good leg room for even taller passengers. However, due to the sloping roofline, head room is not as generous in the back seat for 6-footers. Cargo space measures 16 cubic feet, slightly better than average for the class.

Folks who greatly value performance should give the 2021 Kia K5 GT some consideration. It has tremendous acceleration for a non-luxury vehicle. In replacing the Optima, all K5 time models deliver increased performance, more curb appeal, and upgraded interior.