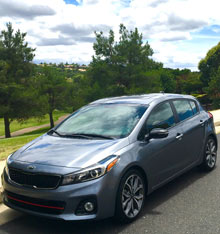 Kia Forte, a Good Bargain with Comfort and  Performance

Roseville, Calif. – Kia continues to improve its brand up and down its lineup. There’s not a bad vehicle in the bunch.

The 2017 Kia Forte is just one of the examples. Redesigned two years ago, the compact class Forte gets noticed right away. There is a lot to like since the redesign – it’s longer, lower and wider than previous models. And the result is a roomier interior, which is always a good thing for a compact vehicle.

The Forte, which is offered in a sedan, coupe or hatchback, provides a generous list of standard features in the base model, including Bluetooth and an iPod interface; xenon headlights; a voice command system; keyless ignition/entry; six-speaker sound system with a CD player; satellite radio and USB/iPod/auxiliary input jacks. The standard equipment also includes heated front and rear seats, a very unexpected nicety.

We drove the hatchback for a week and loved it. It came equipped with a seven-speed, dual-clutch manual transmission that had a lot of pep. Not only did it accelerate well – even on some steep hills – the Forte hatchback brought some genuine fun to the driving experience even when it was just a mundane, short commute to work. If you can handle a manual transmission, it’s recommended here.

Many savvy car-shoppers have noticed the redesigned Forte looks quite different with more curves and angular lines, a lower roofline, and a new grille design. It’s by far the sharpest looking Forte – ever! This year’s model received an updated front-end styling and the Forte hatchback is now equipped with the automated manual transmission, replacing last year’s more traditional automatic.

Also note that there is lots of competition. The Ford Focus is much improved and the Mazda 3 continues to do well. And both offer better fuel economy. The Honda Civic and Volkswagen Jetta are also strong competitors, along with the Chevrolet Cruze, Toyota Corolla, and Hyundai Elantra, which is somewhat of a Forte knockoff.

Even though it handles quite well, the Forte is still not considered sporty. However, it does offer a nice composed, quiet ride. The automatic transmission goes through its gear changes with efficiency and very little noise. The steering and handling will leave the driver feeling confident.

Also to be admired is the Forte interior, which is highlighted by a handsome cabin that has a fair amount of soft-touch material. There’s good leg and head room for all occupants and the trunk space is generous for the class at 14.9 cubic feet.

The 2017 Kia Forte is an attractive compact car that features many admirable qualities, including comfort and solid performance. It also remains a pretty good bargain, although the sticker price continues to rise. However, the Forte still remains a solid value.