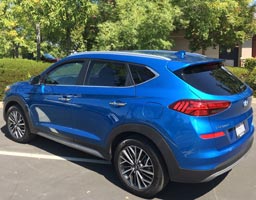 Roseville, CA- Previously an uninspiring competitor to the top-selling compact crossover sport utility vehicles, the Hyundai Tucson now finds itself situated among the heavyweights in the class.

Three years ago, the South Korean auto manufacturer gave the Tucson a smart redesign that added more style, sophisticated technology, a better choice of engines, and bumped up the fuel economy as well. Other improvements now include a roomy interior, solid safety features and ride quality.

Hyundai reinvented the Tucson and made it a credible challenger to such stalwarts as the Honda CR-V and Toyota RAV4. The Ford Escape, Kia Sportage, Subaru Forester, and Mazda CX-5 are other notable five-passenger, compact SUVs.

Although the price for the base model 2019 Hyundai Tucson has increased to just over $23,000, the improvements are worth the extra dollars. It’s also good to know that like all Hyundai vehicles, the Tucson benefits from the powertrain warranty that’s good for 10 years/100,000 miles.

The base engine is a 2.0-liter, four-cylinder that generates 164 horsepower and 151 pound-feet of torque. Although the performance is considered lackluster for some, the upgraded 2.4-liter engine, which produces 181 horsepower and 175 pound-feet of torque, is quicker than the base model, going from 0-60 mph in 9.1 seconds. We drove the 2.4-liter and were impressed how much the performance improved while in sport mode.

Both engines are paired with a six-speed automatic transmission. Not surprisingly, the 2.0-liter has slightly better fuel economy (23-30 mpg) than the larger engine (22-28 mpg).

Regardless of the engine selection, the Tucson provides a good ride for the class. It handles challenging turns with efficiency and delivers a smooth, quiet freeway ride. The Tucson is more safety conscious this year, thanks to the addition of collision avoidance and lane keeping assist as standard features.

Getting acclimated to the Tucson interior doesn’t require a crash course in technology. Control buttons and gauges are straightforward, and the 7-inch touchscreen is fairly intuitive. Standard features include Apple CarPlay and Android Auto.

There’s good head and leg room for driver and passenger, and second-row occupants. However, three adults remain a definite squeeze in the backseat. An added plus is the second-row seats recline and offer enough room to seat three people with some degree of comfort.

The Tucson comes equipped with solid cargo space, offering 31 cubic feet behind the rear seatbacks. With the second row folded down, that room increases to 61.9 cubic feet. Those numbers still don’t match the CR-V (39.2 and 70.8 cubic feet).

One cool feature of the Tucson that will be appreciated for anyone who’s hauling around kids is the unique cloth upholstery. It’s an odor and stain resistant fabric that doesn’t allow spilled liquids to seep into the material. Not only does it prevent stains and odor, it’s easy to clean up.

Even though there are still more exciting vehicles in the class, the 2019 Hyundai Tucson is capable of competing against the leaders. It should be on the short list when considering a compact crossover SUV.