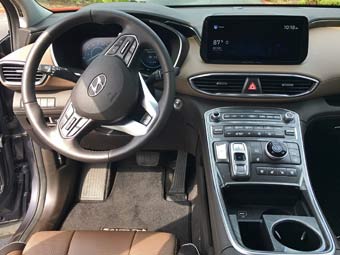 Roseville, Calif.- After ignoring the urge previously, Hyundai is making up for lost time as it moves into what might be called its hybrid stage.

The South Korean automaker has a new sport utility vehicle, the 2021 Hyundai Santa Fe hybrid. The company has also introduced several of its popular models with hybrid versions – Sonata, Elantra, and the Tucson, a smaller SUV than the Santa Fe.

Plug-in hybrid on the way

Hyundai Santa Fe hybrid is a midsize, two-row SUV with standard all-wheel drive. Not willing to rest on its laurels, Hyundai will unveil a plug-in hybrid Santa Fe next year.

There’s no doubt that Hyundai is enamored with its SUVs. Besides introducing the Venue last year, it also debuted the Palisade, the brand’s largest-ever vehicle. Other Hyundai SUVs include the Santa Fe, Tucson, Kona, and Ioniq, a new electric-powered model.

Hyundai made numerous changes to the Santa Fe in its 2019 redesign, the biggest one being the elimination of the third row. The latest version of the hybrid SUV is loaded with standard features and has solid technology and driver aids.

Most drivers will be pleased with the performance the Santa Fe hybrid delivers. All three trim models (Blue, SEL Premium, Limited) are powered by a turbocharged 1.6-liter, inline-four engine that’s paired with a hybrid system and generates a combined 226 horsepower and 258 pound-feet of torque. It has a six-speed automatic transmission.

Seating is good for both rows in the five-passenger hybrid. It keeps the driver happy with an eight-way power seat. Taller 6-footers in both rows will enjoy the head and leg room. A nice touch is the rear seat slides on rails to either expand leg room or cargo space, which is generous at 36.4 cubic feet and 72.1 cubes with the second row folded down.

There are many reasons to like the 2021 Hyundai Santa Fe hybrid. It has a good powertrain, a roomy interior, lots of cargo space, and its starting price ($33,800) is reasonable.