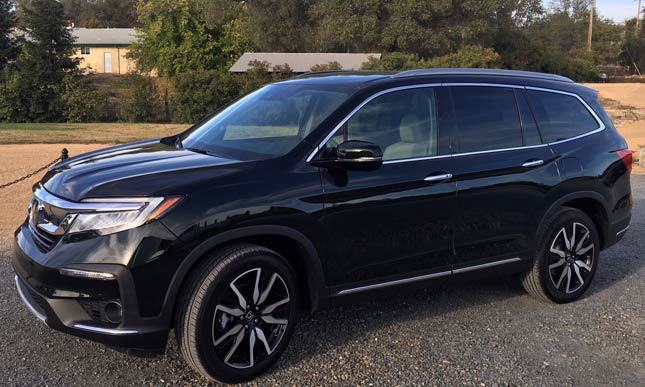 Roseville, CA– Three years ago, the Honda Pilot went through some major changes. Practically everything was new – engine, transmission, styling, and interior features.

Although the Japanese automaker has made additional changes to its popular midsize crossover sport utility vehicle, the 2019 Honda Pilot is not dramatically different than the 2016 model.

New this year is a reworked nine-speed automatic transmission that had drawn criticism in the past. It’s now more responsive. Some new safety features have also been added. And in the minor issue category, Honda now has a volume nob.

What hasn’t changed is the Pilot’s primary mission – it remains a three-row people hauler capable of transporting eight, although that number dips to seven with the Elite model and its comfy second-row captain’s chairs.

Another area that remains the same is the front-wheel drive Pilot comes with just one engine. It’s an efficient, powerful 3.5-liter, V6 that generates 280 horsepower and 262 pound-feet of torque. The Pilot has been clocked going 0-60 mph in 6.9 seconds. Thanks to its cylinder deactivation and engine stop-start system, the Pilot is relatively fuel-efficient, getting 19-27 mpg.

For $1,900, all-wheel drive is a Pilot option, except on the Elite model that already comes equipped with AWD. An upgraded Honda Pilot with AWD delivers some toughness. With active center and rear differentials to redistribute power, the Pilot can tackle off-road surfaces like sand, mud and snow. The two-wheel drive Pilot can take on nothing more challenging than a dirt road. The Pilot can tow up to 5,000 pounds.

Adding to the Pilot’s overall appeal is its ability to deliver a comfortable and composed ride. It offers reasonably precise steering and gives the driver a fair of amount of confidence in all situations. That includes an ability to maneuver on challenging mountainous roads, where the Pilot is steady and predictable.

The Pilot interior utilizes lots of soft materials and has cool acoustic equipment to soften the overall noise. Although Honda doesn’t like the inference that the Pilot can look and act a bit like a minivan, it has multiple cupholders and bins, and can match most of its rivals in terms of overall technology. It has spacious and comfortable seating in the first two rows and even the third row is fairly suitable seating for adults, a rarity in most three-row vehicles.

The cargo space behind the third row is not great, offering 16 cubic feet. But that space expands to 84 cubic feet when the second and third rows are folded down.

The 2019 Honda Pilot continues to be a good selection in the midsize SUV class. It’s reasonably priced, provides good performance and handling, and its spacious, modernized interior is another major plus.