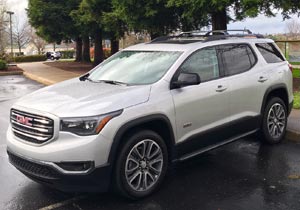 Roseville, Calif. – It’s time to give the GMC Acadia a look. The changes have been dramatic since GMC decided to revamp its midsize crossover sport utility vehicle last year.

The result was an SUV that’s smaller and lighter than ever before. The shorter Acadia is now a better fit for what many SUV car shoppers are seeking. Sure, large SUVs remain in demand, but a midsize with the type of versatility like the Acadia offers is more appealing to the masses.

The Acadia remake has a sophisticated exterior that’s narrower overall. There was nothing too dramatic with the design in 2017, but it’s noticeable for knowledgeable previous Acadia owners. The GMC design is prominent in its grille, facia treatments, and other details. Overall, the Acadia has a rounder appearance and the windshield has taken on a steeper rake angle.

However, some still may look at the exterior and think it’s kind of truck-like and doesn’t reflect its car-based platform.

In the GMC lineup, the Acadia slots above the smaller Terrain and the full-size Yukon. Smaller than its predecessors, the Acadia still can act as the family hauler, while also providing mom or dad with an SUV that’s fun to drive, especially when equipped with the larger V6 engine.

The standard Acadia comes with a 2.5-liter, inline-4 engine that generates 194 horsepower and 190 pound-feet of torque. It reportedly reacts well with the six-speed automatic transmission. Gas mileage is 21-26 mpg and is slightly better than the V6 engine (17-25 mpg).

We test drove the Acadia V6 model and were quite impressed with the performance. The engine is a 3.6-liter, V6 that produces 310 horsepower and 271 pound-feet of torque. We enjoyed the additional power provided by the larger engine. It was more than enough in all driving situations, including a trip to the mountainous Lake Tahoe region. The V6 Acadia can go 0-60 mph in 6.3 seconds.

We found the Acadia to be fairly accommodating in its steering and ability to maneuver into tight parking spaces. It has an average feel for the road and can be challenging to handle when trying to navigate regions where a lot of S turning is required. There’s an optional all-terrain package that will add hill descent control and an upgraded all-wheel drive system. Note that road clearance is only 7.2 inches.

Some car shoppers may balk at the Acadia’s lack of interior sophistication. While the overall design is functional and easy to learn, it’s not as techy as some may like. Yet it does feature Apple CarPlay and Android Auto integration as part of the standard package.

With the exception of the tight third row, the Acadia is comfortable and roomy overall. The second row has either 60-40 bench seating or captain’s chairs. A “smart slide system is available for easier access to the third row. The cargo area is 12.8 cubic feet and will expand to 79 cubic-feet with the back rows folded down.

In its new smaller configuration, the 2018 GMC Acadia should have more appeal to car shoppers looking for a midsize SUV.