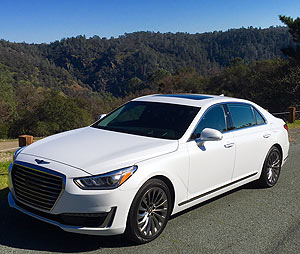 Roseville, Calif.- The goal was to establish a luxury brand, so the folks at Hyundai decided the most simplistic way to begin the process was by not creating anything entirely new.

Why do that when the Korean automaker could just mirror its first two high-end vehicles, a pair of well-received sedans that were part of its regular offerings.

One of those luxury sedans is now the Genesis G80, a successor to the Hyundai Genesis. The other sedan is the Genesis G90, an offshoot of the Hyundai Equus that was originally introduced in 2007. It’s turned out to be a good start for Hyundai, which unveiled its two luxury division vehicles under the Genesis flag in 2017 and anticipates producing six more by 2021.

We were previously impressed by the quality of both the Equus and the Hyundai Genesis. Those sedans helped elevate Hyundai to a new level and ultimately led to the decision of establishing a luxury brand like many other manufacturers did more than two decades ago: Honda (Acura), Toyota (Lexus), and Nissan (Infiniti).

We took a good look at the inaugural Genesis G80 a year ago and started this New Year off by test driving the more upscale 2018 Genesis G90 that features two trim models – 3.3T Premium and 5.0 Ultimate.
In replacing the Hyundai Equus, Hyundai engineers made the G90 more powerful, larger in size, and added more luxury features. It’s been a successful transformation because overall it’s an improved product. The G90 provides comfort, rides quality and has the agility and handling one seeks in a luxury sedan.

One more important characteristic regarding the classic-looking G90: price. It starts at just under $70,000 and the upgraded and 5.0 Ultimate model isn’t much pricier. It costs closer to $80,000 to drive off the lot with a luxury German sedan.

While deserving of a good look, let’s not kid ourselves. A new brand like Genesis can’t match the prestige of its more established competition. And we’re talking about some heavy-hitting rivals with time-honored reputations in BMW, Audi, Lexus, and Mercedes-Benz.

Expect more fill-ups at the pumps driving the G90. There’s not much difference between the standard and upgraded engines – 17-24 mpg vs. 16-24 mph. It has a large gas tank that’s nearly 22 gallons and should provide more than 400 miles per fill-up.

There’s plenty to admire about the G90 interior. It features comfy leather seats, soft-touch features are abundant, there’s a terrific 17-speaker audio system, and the sedan is fundamentally sound and well thought out. While the infotainment system is intuitive and not difficult to master, that might not a plus for people who love techy features.

Note that the G90’s information display, dash layout, and ergonomics are identical to the Hyundai Elantra, a midsize sedan.

The G90 seats five people comfortably – so there’s no issues with head or leg room. The trunk is slightly smaller (15.7 cubic feet) than many competitors and the second row does not fold down. But skiers will like that there’s a backseat ski pass-through.

Although we enjoyed the G90 for multiple reasons, the Genesis brand still needs time to build up the kind of prestige found with Lexus, BMW, Audi and Mercedes-Benz.